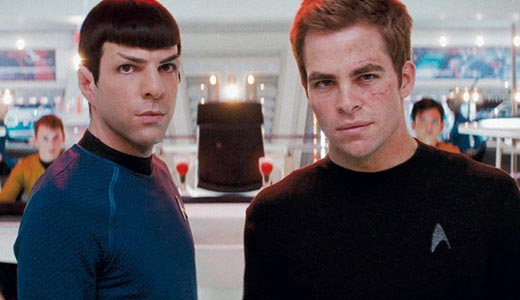 This SciFi Channel/Henson Creatures co-production was something of a guilty pleasure of ours for a time. Interesting characters, out-of-this-world adventure and great special effects (including those puppets!) made for a nice escape each week. But SciFi had other destinies in mind for the lead actors, which caused their characters to become increasingly less human. A pity; this thing had real long-term potential. Now available: all 88 terrific episodes — 29 with commentary! — on 25 discs, plus all the requisite goodies.

What can we say that hasn’t been said by better (paid) men? J.J. Abrams delivers! He succeeded in satisfying even the most hard-core Original ST fans while creating an entirely new mythology upon which to build. He even had the original — now aged — Mr. Spock appear in a critical role to save the universe! Great casting, too, with Chris Pine and Zachary Quinto as the new Kirk and Spock, Zoe Saldana as Uhuru (now Spock’s girlfriend!) and, best of all, Simon Pegg as Scotty. But the best is yet to come: The bonus material in the two- and three-disc sets includes 3-D holographic tricks unlike anything seen on home video before. A must-own!

A WINK AND A SMILE

This hilariously entertaining documentary on the lure of modern-day burlesque follows 10 seemingly ordinary women who set out to learn the art of dirty dancing and striptease. Why? Well, each has a reason, and those reasons are as entertaining as the results. Great stuff.

Think you don’t like opera? Check this out: Duke Bluebeard arrives at his castle with a new wife, who is told to stay out of a certain room. Curiosity leads her to seduce the keys from her husband, only to find herself traveling through seven blood-stained torture chambers! And in the final room? The remains of the Duke’s first three wives … and a spot reserved for her. Yeah, it’s in Hungarian, but that won’t matter.

Billy Zane stars in this cable-flick as a reformed degenerate rock idol who has abandoned his wild ways in exchange for the homey pleasures of wife Jane Wheeler. But it all comes flooding back when he meets nubile singer Estella Warren (looking really gooood) who seduces him, first with her voice, then with the good stuff.

OK, right up front: We’re not fans of Sacha Baron Cohen. But even diehard fans have said to us, “O blessed Gods of Video, why are we tormented by such sad offerings as this? Why doesn’t someone tell that poor man that one dumb gay-joke cannot be padded out to 81 minutes? And why do we prostrate ourselves before two old fat guys?” Or something like that. If you like Cohen, here he is.

DRAWN TOGETHER: THE COMPLETE SERIES

We were sorry to hear that Comedy Central, in its infinite corporate wisdom, canceled this terrific parody of TV reality shows back in ’08. The premise? A group of average, everyday animated characters must share a house together with cameras watching their every move. Neat. Rumor has it that a full-length movie version is due out in 2011.

Cameron Diaz leads a great child-cast in this Nick Cassavetes-directed drama about a young girl (Abigail Breslin) who is created by her parents to be an organ donor for her cancer-plagued sister (Sofia Vassilieva). The rest of the adults, particularly Alec Baldwin as the attorney that the girl hires to “divorce” her parents, are just stick-figures, but the kids really deliver. Yeah, it’s a chick-flick, but a good one.

Thank GOD for Blu-Ray travelogue crap like this! We’ll never make it to the real Hawaii, working for a cheap dirty rag like you’re holding now, so 110 minutes of hi-def sand and surf and volcanoes goes a long way toward making palatable this cold tin of cat food we’re holding. Narrated by F. Murray Abraham and James Naughton, no less. Check it out.

THE LIMITS OF CONTROL

The latest from director Jim Jarmusch focuses on Isaach De Bankolé, a loner whose mysterious activities are always on the knife’s edge where law stops and anarchy reigns. We find him finishing up his most recent “job,” letting his mind wander over the gentle Spanish countryside, yet trusting no one. But as anyone familiar with Jarmusch’s work knows, there’s much more going on.

Chan-wook Park, the director of “Old Boy,” jumps on the sexy-vampire train in this excellent and original tale of a priest whose life is saved by an experimental medical procedure at a terrible cost. Quiet and touching one minute, ultra-violent and ruthless the next. How good is it, really? Everyone we’ve shown it to has asked to watch it again!

THE SOPRANOS: THE COMPLETE SERIES