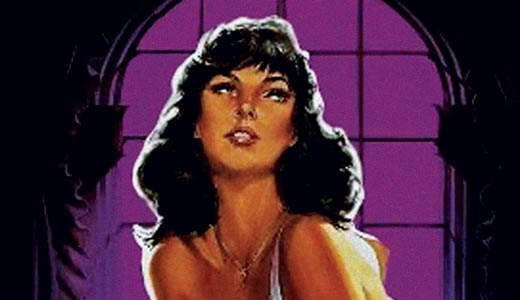 Now fully restored: this once-thought-lost final chapter in art-smut king Walerian Borowczyk’s unofficial trilogy of passion (along with “Immoral Women” and one of our all-time favorite flicks, “The Beast”). Eulogized as “a genius … who also happened to be a pornographer,” Borowczyk sets his tale in 8 A.D., when a poet records the couplings, triplings and gang-banglings of fair young maidens, brawny centurions and the more-than-occasional farm animal. Guaranteed to tent-up the old tunic.

No, not the new “drop-dead gorgeous young women running around in scant underwear while a demented somebody chases them with pointy objects” slasher, this is the ’80s original. The one that had a plot. Seven sorority girls accidentally kill their House Mother in a prank gone wrong. Frightened, they hide her body and carry on a-graduatin’ — but someone knows their secret and starts picking them off, one by one. Oh, what’s a nubile numbskull to do? Why, get nekkid, of course! Just a smattering of skin and a modicum of blood, but we remember it fondly.

While it didn’t cause the cultural frenzy that “The Da Vinci Code” did, Ron Howard, Tom Hanks and company do a good job bringing Dan Brown’s admittedly silly Da Vinci warm-up tale to the big screen. Fun, a nice date flick, but it won’t change your life or anything.

If you remember this first-person-shooter vidgame from 2004, you’ll enjoy this live-action version with Til Schweiger as Jack Carver, ferrying Emmanuelle Vaugier across Micronesia (nice work if you can get it!) until attacked by a mad scientist played by the always-amazing Udo Kier. Produced and directed by Uwe “House of the Dead” Boll.

Vince Vaughn and Reese Witherspoon are forced to spend the holidays with relatives instead of their usual vacation getaway. Oh, boo-hoo. With costars like Jon Favreau, Robert Duvall, Mary Steenburgen, Kristin Chenoweth, Sissy Spacek, Tim McGraw, Jon Voight and Dwight Yoakam, you’d think they’d find some way to enjoy themselves. A great cast can’t hide the fact that the basic premise of this movie is a downer.

Judd Apatow and Adam Sandler had this idea: A world-famous comedian (Sandler) who is dying sees himself in an untested wannabe stand-up (Seth Rogan) and decides to give him some pointers. In the original screenplay, Sandler died, but everyone was having so much fun making the movie that they re-wrote it mid-stream so that Sandler recovers! Probably the most accessible thing Apatow has ever done. Recommended.

From the Criterion Collection comes this shocking, groundbreaking and thoroughly immersive contemporary gangster flick from Italy. Five unrelated tales of men and children trying to survive in the real-life cesspool of corruption that is Naples. Each participant seems detached and blasé — they are too jaded to expect succor or interference from the authorities — and ends with gut-wrenching violence. One of the very best movies of 2008, but not for the timid.

Ice Cube and Mike Epps are would-be concert promoters who make big promises to bring a superstar rapper to town, only to have it blow up in their faces in this edgy comedy.

While almost unknown in America, this tale of Dan Morgan, a real-life outlaw in 1800s Australia, is considered a national treasure down under, and its star, Dennis “Easy Rider” Hopper, an honorary citizen! A small-time horse thief, Morgan is captured and brutalized by his jailers, turning him into a blood-thirsty killer, eventually wanted dead or alive. Simply terrific.

This great family flick has Robert Rodriguez written all over it — which is a good thing. A rainbow-hued “wishing rock” sends a young boy on a colorful, CGI-enhanced adventure, making him the target of jealous kids and adults alike. Costars Jon Cryer, William H. Macy and James Spader.

In many ways this film — though largely unremembered today — helped launch the ’80s horror-movie revival, alongside the better known “Halloween.” What makes it memorable is that it was key to the movement away from “spiritual” horror toward the more graphic and human-bound “slasher” kind, with Rebecca Balding hiding from scream-queen Barbara Steele, while cops Cameron Mitchell and Avery Schreiber look for a murderer amid a dark family secret. A real gem with Yvonne De Carlo in a cameo.

Justin Long tries for meatier rolls in this indie effort. He’s the self-appointed protector of a minor historic battlefield, about to be plowed under as part of an Indian casino. Drop-dead gorgeous Emmanuelle Chriqui costars as the town siren who helps him.

If you’re an animation buff who’s never heard of Alexandre Alexeieff or Claire Parker, here’s your chance to revel in the discovery of true genius. A single disc with more than 30 shorts, including the simply breathtaking “Night on Bald Mountain” — plus the now-famous stop-action talking noses! If you don’t know what we’re talking about, then you really owe it to yourself to check this out.

To call this indie vampire-martial-arts-actioner “ambitious” is the height of understatement. A beautiful woman dies and is resurrected as a vampire by a secret government program. Her job: to kill other vampires before they can obtain a powerful book that will make them invincible, and the human race extinct. Is it any good? Well, that’s debatable, but we found it entertaining, which is good enough in our book.

THE SOPRANOS: THE COMPLETE FIRST SEASON