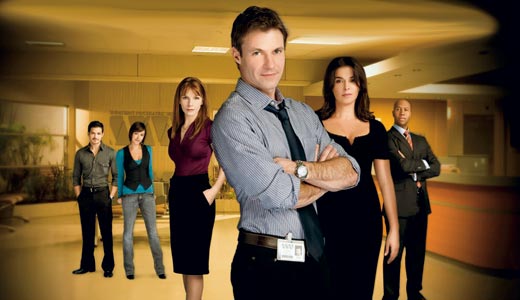 While this isn’t the late David Carradine’s last picture, it was his last Western, the genre that made him a star (sort of). Here he plays a U.S. marshal on the trail of a former Civil War sharpshooter (Jim Hilton, who also wrote the script), a man who has fallen on hard times and forced to use his assassin skills for profit.

Fox Studios has been manipulating the fans of this intriguing little drama set in a mental hospital, teasing them about whether or not it will return for another season. Bottom line: It’s coming back, but now they’re teasing about whether or not Chris Vance will return as Dr. Jack Gallagher. Episode 3 features the last-ever TV appearance of the late David Carradine.

BETTER OFF TED: SEASON ONE

Aimed at “Scrubs” and “South Park” fans, this series starring Jay Harrington is often better than the American version of “The Office” (which obviously inspired it), but is more rooted in tried-and-true American sitcom conventions. Portia de Rossi, in particular, is perfectly bitchy as his evil boss who spouts, “OK, drones! Listen up!” From the guys behind “Andy Richter Controls the Universe” and “My Name is Earl.” It’s not “I Love Lucy,” but we like it.

There have been a lot of these mixed-martial-arters lately, and we expect 2010 to be a banner year for them. This one has your typical MMA plotline — “some guy is forced to fight” — but is better than most. With Hector Echavarria as “some guy,” the always-aromatic Nick Mancuso, good-looking soaper Tanya Clarke and Quinton “Rampage” Jackson.

This Discovery Channel reality series is often disturbing, focusing on film of structures, planes, cars, etc. — many with people still inside — being almost instantly destroyed by natural disaster or human folly. Has the same fascination as, say, “Cops,” but on a larger scale.

IMAX: RIDE AROUND THE WORLD

A wide-screen look at the 1,200-year history of cowboys from around the world. The Blu-Ray version, in particular, brings home the romance, beauty and danger of a life on horseback under big skies. We really enjoyed this.

We recommend sitting outside your favorite vidstore before it opens: This is one of the best MSTie offerings ever, but it’s a Limited Edition pressing! Contains four perfect movies: “The Corpse Vanishes,” Bela Lugosi’s most truly shocking mad-doctor flicks, with Angelo Rossitto as a murderous dwarf; “Warrior of the Lost World,” that Z-movie treasure with the talking motorcycle; the wonderful male-astronaut-returns-to-Earth-PREGNANT drive-in classic, “Night of the Blood Beast”; and the simply unbelievable — and, really, we mean that — 1959 dubbed-Mexican howler “Santa Claus Conquers the Devil” (aka “Santa Claus”) in which the jolly old elf is beset by the ickiest, whiniest, most disturbing … oh, just trust us, this thing defies explanation. With both Mike and Joel and a Tom Servo figurine. Our highest recommendation.

NIGHT AT THE MUSEUM: BATTLE OF THE SMITHSONIAN

While the first “Night” suffered from Ben Stiller overload, this fun sequel ups the star-count and goes overboard on zany action bits to create mob movie mayhem on a massive scale. Stiller returns, as does Robin Williams and Owen Wilson; newcomers include Hank Azaria as main bad guy Kah Mun Rah, with Amy Adams as a lovely Amelia Earhart, Christopher Guest as clueless Ivan the Terrible and Ricky Gervais as Woe Fully-Underused. The higher-priced sets include a two-disc “Monkey Mischief Pack” and a three-disc Blu-Ray version with a bonus digital copy.

While Michael Cera’s name appears in bold letters on the cover, this stars his at-the-time girlfriend Charlyne Yi, who sets out to make a documentary on what “love” is. With cameos by Seth Rogen, Paul Rust and Demetri Martin.

This fourth in the franchise drops the exciting present-day escape-from-the-robots premise in favor of a dark, the-robots-have-won-and-mankind-is-all-but-extinct plotline that allows more continual carnage — and a better launch of the video game. Christian Bale takes over as John Conner, but has little to do except grunt through this colorful, noisy, reboot of a once-intelligent sci-fi series that now borrows from both “Transformers” and “Battlestar Galactica” before finally petering out. Notable eye-candy includes Bryce Dallas Howard, Moon Bloodgood and Helena Bonham Carter. Disappointing.

THE GIRL IN THE PARK

Sigourney Weaver, Kate Bosworth and Keri Russell are just a few of the big names that pepper this dark and emotional chick-drama (or is that redundant) about a woman whose 3-year-old daughter disappeared 15 years ago. Still devastated, she latches on to an 18-year-old stranger whom she believes to be her long-lost child.