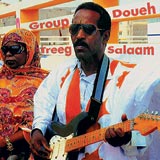 Released in conjunction with their first-ever European tour this past June (the first time audiences outside of Western Sahara saw them perform), Group Doueh’s second album, Treeg Salaam, on the always-intriguing Sublime Frequencies label, is an achievement. Discovered by label founders Alan Bishop and Hisham Mayet in 2005, the group is built around the relentless, driving electric guitar of main man Doueh, joined by his relatives on various other instruments (some of which are homemade). Fans familiar with the Mali “dry guitar” style propagated by Ali Farka Toure will hear some similarities in Doueh’s technique, but will be blown away by his amazingly fast fretwork and the distorted nature of the group’s DIY recordings. Yet on Treeg Salaam, Doueh occasionally showcases a mellower form of his guitar heroics, and the album’s side-long ender “Tazit Kalifa” displays an almost-tender lyricism otherwise rare in Doueh’s desert music.