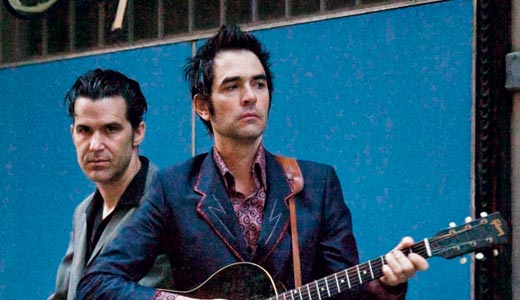 Love, adoration, obsession. Those themes infect Midnight Soul Serenade, the latest by Heavy Trash, aka Matt Verta-Ray and Jon Spencer. Verta-Ray engineered this blues explosion at his NY HED studios. Heavy Trash and recent Departure Records signees The Ladybirds play The Vernon Club (1575 Story Ave., 584-8460) on Tuesday, Nov. 17, at 7:30 p.m. Tickets for the 18 and over show are $10 (adv.), $12 (door).

LEO: What was it like working with Simon Chardiet?
Jon Spencer: Simon Chardiet is a real character and an incredible musician. This isn’t the first time he’s played on a Heavy Trash album, but he’s on this one a lot more. Now he’s part of our permanent touring band. Simon’s not only a fine bass man, but a great singer. (Drummer) Sam Baker (Lambchop) is in our lineup.

LEO: No big stylistic changes?
JS: We didn’t have a big plan for this new album. We wrote, recorded and mixed 30 songs. At a certain point, we set aside the up-tempo rock ’n’ roll numbers, but we sort of put those aside and went for this … midnight soul serenade. We wanted to present a different side. This is the statement or the album we wanted to make at this point.

LEO: What makes this record different?
JS: Thematic unity. Most of the record is concerned with love, adoration, devotion, obsession. Other than that, we try out and explore some different kinds of styles, different methods of attack, and different sounds, different feelings. Two of the songs we mixed with Alap Momin (Dalek) … have a more modern side to them. Quite frankly, rockabilly is the reason we’re doing this band, but we’re not tied down.

LEO: How much variance is there in the live show given so many guest musicians on this album?
JS: It’s a completely new band. This summer, we spent a lot of time working it out, and it was a challenge. Previously we’d had bigger bands — five people, six people, more hands available. This (time) it’s only four people. When I say work it out, we don’t play a programmed set. Every night it’s a little different. It’s like training to run a marathon or swim the English Channel.

LEO: Who breaks the ties when you and Matt disagree?
JS: We’ve been very lucky. We agree on pretty much everything. When someone feels strongly on something, the other senses that and acquiesces.

LEO: Who are you listening to?
JS: The Micragirls, three women who are from a small town in Northern Finland. Been enjoying that a lot lately, plus a couple of books by The Fall.