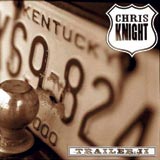 Trailer Tapes II is the latest offering from Slaughter, Ky., native Chris Knight. His beautifully dark lyrics seem to hail from the ether between honky-tonks and coffeeshops at 4 in the morning. These songs feel painfully personal from the outset, but maybe that’s what happens with an album that contains little more than guitar and voice. Intimacy is inevitable. Knight has spent the last decade writing songs for artists like Cross Canadian Ragweed, Montgomery Gentry and Randy Travis — on Trailer II, we get to appreciate the writer’s take on his own songs. Knight sings, I had to work to become the jerk I’ve come to be and Wanted to hear some rock ’n’ roll, but all they played was blues with the same ramshackle swagger as his idol John Prine sang about Muhlenberg County.