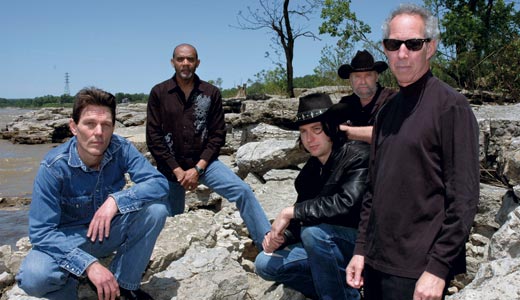 Ricky Feather has read articles about his band, Bodeco, before.

“We kept seeing these lines in a lot of articles that said: ‘Primarily a live band.’”

The shows that such lines referenced were “a little Mardi Gras …,” he says. “We would have it where there was quite a bit of alcohol on stage. And people would be tossing mugs of beer at you. So there was this big debacle going on. And then it turned into something else.”

Joints were passed. Rowdy fans threw dukes amongst each other, leaving the band as not only entertainer but also referee.

“Wham — somebody getting hit in the head or something like that right in front of the stage,” then, “‘Hey, hey, cool down, man.’”

Drinking and drugging are in the past now, as the band has grown up. Bodeco’s members often occupy their time with other endeavors: Feather is pursuing a degree in graphic design at Ivy Tech in Sellersburg. Guitarist Jimmy Brown is running Guitar Emporium on Bardstown Road.

However, with its new five-song EP Soul Boost, the band is hoping to bring a little bit of that live magic back to bear. A show, launching the disc, is scheduled Saturday at Headliners. Fueled by zydeco and boogie-woogie influence, the band came together as a two-piece guitar and drum combo back in the late 1980s and began adding members. It gained a following locally in the early and mid-1990s in the midst of a sort of rockabilly renaissance that brought bands like Southern Culture on the Skids to the mainstream.

The new disc, on which three of the five songs are instrumental, was recorded in a basement studio in the Highlands. Though featuring a few lineup changes on guitar and drums, it still has the hard-boiled Southern sound that initially won the band followers. Twangy guitar licks alternate growling vocals. Instrumental songs like “Zobop” lay down a heavy, thumping, boggy cadence on which guitar hooks and chords slither.

“It’s sort of a two-fold thing,” says Brown, who’s been with the band since the early days. “We’re able to put out a lot of energy on a bandstand. Ricky has a keen knack for coming up with instrumentals. This CD kind of encompasses both.”

Though it’s pressed on a CD, the band sees it as more of a record — with one theoretical side vocal and the other instrumental.

“We feel really good about this one,” Feather says. “Those first three songs — I feel like they are as good as anything we’ve ever done. And we’ve kind of been able to do a couple of things we’ve never done (in terms of production quality).”

Feather says that by doing fewer songs as opposed to a traditional album, the band was able to put more time and attention into fine-tuning each. The new material has been in the works during the last few years, as the band has done only a few live gigs around town and gotten to know its new members.

“We’re looking forward to trying to develop a little tri-state circuit that we play” Feather says, referring to trips between Louisville, Cincinnati and Illinois.

“And we’re pulling out some nuggets, too,” Brown adds. “… things we haven’t played in a while.”

Tickets for Saturday’s show are $10. A dollar from each ticket will go to Starduck Charities, which will then pass on the proceeds to St. Joseph’s Children’s Home.