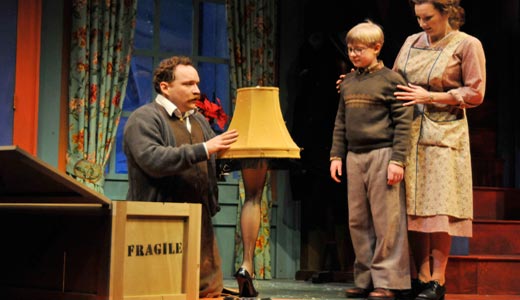 (Actors Theatre of Louisville presents “A Christmas Story” through Nov. 28. Directed by Sean Daniels. For tickets or more info, call 584-1205 or go to actorstheatre.org.)

Attempting a production of a film or story that everyone is familiar with must be a daunting task. Do it wrong or slightly revise the storyline, and you might as well consider yourself the next antichrist. Yet if you follow the original line by line, insults of “boring,” unoriginal” and "copycat” come hurling your way. Luckily for Actors Theatre, their first-year production of “A Christmas Story” walked the delicate balance between the two, and audience members found delight not only in the known (tongue to pole, check; pathetic pink bunny suit, check; atrocious leg lamp, check) but the original (the elf stagehands who became part of the set and storyline at times).

The play was adapted by Philip Grecian from the beloved holiday film written by Jean Shepherd, Leigh Brown and Bob Clark. The story revolves around young Ralphie Parker’s campaign for a Red Ryder carbine-action, 200-shot Range Model air rifle with a compass in the stock and a thing which tells for Christmas amid seasonal mayhem and family shenanigans that most of us can relate to. Although it takes place in 1940s Midwestern America (Hohman, Ind., to be exact), much of the comedy in the script is timeless. “You’ll shoot your eye out,” Ralphie’s mom immediately says when he expresses his one, true Christmas wish.

The production moved fast and stayed fairly close to the film version, with minor tweaks and creative set design. Alex Underwood as Ralphie was spot-on, complete with the muffin-top blond haircut to the circular, oversized rim glasses (that’s right, Ralphie was sporting the circular spectacles long before anyone named Harry Potter came flying through town). Ralphie’s parents, played by Suzanne Friedline and Justin R.G. Holcomb, kept the laughs coming as they exaggerated the repressed ’50s-style of parenting — you know, keep smiling even if you’re cracking on the inside. And little Gabe Weible, who played younger brother Randy, was absolutely adorable and stole most of the scenes he was in.

If you’re a diehard “Christmas Story” watcher, then you’re most likely drooling over your tickets by the hazy light emanating from your leg lamp. If you’re on the fence about this production, I recommend giving it a shot. The storyline’s fresh narrative becomes a central figure rather than an ominous voice.