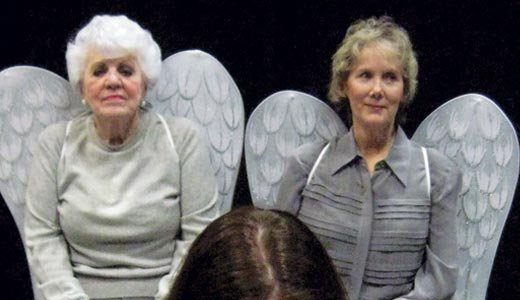 Michael Drury, artistic director of Pandora Productions, could have taken a conventional path by casting two women to play the 40-something characters who populate the wickedly funny “Parallel Lives: The Kathy & Mo Show.” The play (which won an Obie in 1989) was written and performed by two women, Kathy Najimy and Mo Gaffney, and most productions follow the original two-person template.

Instead, Drury went a different way: He assembled a group of nine women to take on the various roles. In pure theatrical terms, the production, now running at the Henry Clay, is superb. Smart and fast-paced, it’s a show that veers easily from ribald humor to shocking provocation, from witty irony to poignant sentiment — sometimes in the space of a few nimble emotional moments.

More importantly, Drury’s decision gives audiences a chance to see an extraordinary group of Louisville actresses giving what amounts to a bravura clinic in ensemble performance.

The play begins shortly after the creation of the world by a couple of winged “Supreme Beings” (Mary Ann Johnson, Chris Cook) who make executive decisions about the human race. Women, they decide, will bear children. But concerned that men will envy this privilege, they level the playing field by inventing a “small portal” through which those babies will emerge. And in case that’s not sufficient to assure equity among the sexes, they also give men extremely large egos.

From that point on, short sketches illuminate the humor and pathos of female (and male) experience. Nancy Hoover and Elaine Hackett capture the blunt muscularity of male bonding in a scene that shows what the world would be like if it were men who used tampons (yes, they’d be high-fiving about using Super Plus sizes — on their light days). In a sketch that lampoons the ironies of feminist sisterhood, Julia Leist and Jennifer Poliskie play bouncy cheerleaders who spell out W-O-M-Y-N, then proclaim their individuality in ironic synchrony. And Raven J. Railey is fascinating as a vapidly mercurial anti-abortion protester whose response to a clinic shooting circumnavigates a realm of emotional responses in a matter of moments.

There’s not a weak performance to be seen, but Alice Ryan Chiles is hypnotically powerful as a rich, divorced, Beverly Hills wife who rationalizes her life of privilege while giving instructions to her pedicurist; Hackett and Laura Ellis are spot on as a drunken barfly and the honky-tonk object of his affections; Cook and Ellis sport anatomically correct aprons — and spout grandiloquent pentameter — in a droll send-up of Shakespearian seduction language and morality.