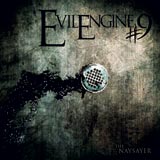 Grunge, metal and, on a lesser level, emo are combined with relative aplomb in this freshman EP by Evil Engine No. 9. I am more a fan of the first two genres mentioned, but these songs are catchy and lyrical. The sound gets a little redundant at times, especially for a five-song release. The commercial potential of this band is great. Echoes of Alice in Chains and Soundgarden make up for the offensively emo moments that are sparse enough not to ruin the record. The band also has a knack for tough-sounding titles. “Go Wrong” and “Open Sore” are my two favorites. I look forward to the group’s full-length release and am confident they will have found their voice by then. I hope they seriously reconsider some of their influences, though. They are on the verge of something both unique and lucrative.