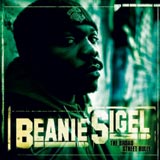 This is not a proper album but not quite a mixtape. IndependentSiccness.net tends to gather pretty decent names who just happen to be in between record deals (Ginuwine, Mobb Deep, Styles P) for “albums between the albums,” short-term deals often allowing an artist to empty vaults or hard drives with a collection of unreleased songs. In many cases, this vault-clearing can be great for fans, with high quality tracks that may have been cut due to expensive samples or simply not fitting with earlier projects. Sometimes, however, you realize that outtakes are that for a reason. Beanie Sigel has made a couple near-classic albums in his career, and has a pretty ridiculous set of songs if you’re making up your own “best of” playlist. Broad Street Bully, for the most part, lives up to the definition of “outtake.” None of it is bad. Sadly, most of it is mediocre. These are songs Sigel can make in his sleep; they require no effort or creativity. Only “Sicker Than Your Average” featuring fellow ex-Rocafella Freeway and album closer “The Ghetto” make me reach for the repeat listen. That said, I can’t wait for Sigel’s next proper album.