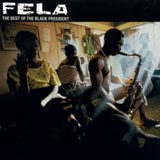 Got Fool’s Gold and Antibalas on repeat? Go archival for their prolific ancestor. This is the first of what will be 45 reissues both on CD and wax of albums by Afrobeat’s patron saint and multi-instrumentalist, Fela Anikulapo Kuti. Born in 1938, in Abeokuta, Nigeria, Fela’s musical consciousness developed first out of attending spiritual traditional celebrations by the Egab Branch of the Yoruba Tribe. His instrumental training in London led him to found Koola Lobitos, which he later took to the United States and renamed “Africa 70.” Upon returning to Nigeria, he opened his own club, Afro-Shrine, a lightning rod for young people who gravitated to Fela’s seductive rhythms and tales of ordinary people enduring political and socio-economic struggle. Fela passed away in 1997; it’s little wonder these reissues will further cement his legacy. Best comes complete with DVD footage of Fela’s performances at Glastonbury and Berlin Jazz Festival, as well as an interview with Fela biographer Carlos Moore. The Best of The Black President is, by design, a greatest hits collection, compiling 13 popular and timeless compositions.