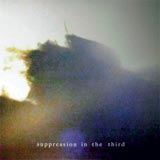 Listening to a noise recording can sometimes be a losing proposition as the sound dynamics present in a live setting can be absent. Not to mention that if your stereo’s volume is too loud, you might royally piss off your neighbors. Thankfully, Suppression in the Third, the new double 10-inch by North Carolina-based noise artists Jason Crumer and Roxann Spikula, has plenty of interesting subtle moments suitable for home listening, even if those moments are occasionally submerged in a bed of harsh noise. Crumer, a former member of the pleasantly named Facedowninshit, doesn’t seem to be going for the jugular as he did on his 2008 release Ottoman Black (which I can only play when my girlfriend isn’t home). Whether that’s due to Spikula’s influence is mere speculation, but the calmer approach is welcome.