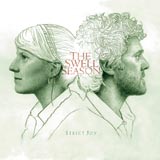 Glen Hansard and Marketa Irglova, also known as The Swell Season, took the world by storm a couple years back with their debut release, the Oscar-winning soundtrack to the film “Once.” They are following up that success with the new release Strict Joy. Off the bat, I can’t say this album is as likable as Once. The chemistry is still here, the intimacy that Hansard and Irglova convey in their voices remains, but the sweetness seems to be missing. Songs like “Feeling the Pull” and “High Horses” come off like the pair is brooding over their own success, as opposed to embracing the softhearted naiveté that made us fall in love with them in the first place. Instead of reveling in the simple pleasures, they seem to be wallowing in them, and it’s not quite as charming.