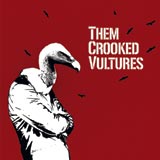 Josh Homme and Dave Grohl coaxed Led Zeppelin’s bassist-and-more John Paul Jones into some jams and gigs under a jokey collective name. Normally, the resulting supergroup CD would stake out a compromise of everyone’s style — but not this time: The two junior members want to be as Zeplike as possible, as long as they transcend mere mimicry. Their near-total success is a lot of turn-up-the-speakers fun. Grohl drums with infectious giddiness, swinging and swaggering in a rhythm section alongside one of his heroes. Homme accepts frontman duties for vocals and guitar, and he hardly ever overdoes it with his busy-clever side. “Nobody Loves Me, and Neither Do I” dives in with a pitying paean to a groupie — updating many a tune from the Plant/Page songbook (“Sick Again,” “For Your Life”). The Vultures produce no riff-for-the-ages, but “Elephants” and “Spinning in Daffodils” shouldn’t be so good when they’re just cacophonous pastiches in honor of Jones’ former band. The set only drags during a sadly long “Warsaw” — but if this trio plans a return trip to anywhere else, I’ll follow along.