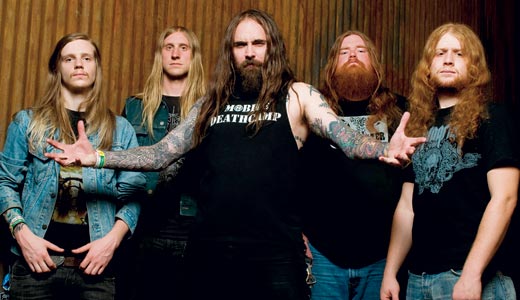 Sophomore slump? Not much slumps when you’ve got the energy of the five young Ohio headbangers who’ve banded together as Skeletonwitch. Breathing the Fire has just come out, and it’s got all the pummeling rhythms and rapid-fire, old-school-metal thrills of its great predecessor, Beyond the Permafrost … and more. The songs are all ridiculously tight. Twin guitar leads swirl through many of the best tracks like powerful contrails decorating the heavens, then give way to aggressive, lightning-quick riffing.

The new record was produced, recorded and mixed by Jack Endino, who was a fixture of the Seattle music scene even before he worked with Nirvana on Bleach. Skeletonwitch guitarist Scott Hedrick tells LEO by phone that the sessions for the second album were different for a number of reasons. First off, the band could take more time — three weeks, versus nine days for Permafrost.

“We recorded the drums in one studio and the guitars in another studio this time — both in Seattle, and both with Jack. One studio has a really big room he likes to use for drums — it gets a really good natural drum sound. And then get all the guitars and bass and vocals in one room in another, smaller studio that wasn’t as expensive.

“One of the cool things about Jack Endino is that he really, really gives a fuck about the bands that he’s working with — and the fact that his name’s on the record. There’s no lackeys (at the studio) … it’s just you and Jack for 12 hours. We’d be there until 2 or 2:30 (a.m.), and we’d come back the next day, and he’d say, ‘I couldn’t sleep, so I did a couple of rough mixes of your songs.’ It’s awesome how much he’s like this mad scientist at the studio.”

The band is ready to reproduce it all live (at Uncle Pleasant’s Sunday night, on just before Black Dahlia Murder). But is it difficult to sync up something like a dual lead in a complex bit of thrash when you’ve been on the road for weeks on end?

“It takes a lot to fluster us,” Hedrick says. “You may be able to find us extremely hungover from the day before, but when we’re getting ready to get on stage and we’re warming up and the crowd’s out there … you get excited and you can do almost anything for the duration of the set. You may collapse afterwards, but adrenaline and the proper beer buzz helps us (on stage). We do run a pretty tight ship, but then we grip it and rip it and don’t think about it.”

Hedrick has a journalism degree, but when asked about his dream interviews, they’re all deceased; is this what happens when you run through an hour or so of songs about netherworld night after night? He’s a major fan of Judas Priest, especially for how they evolved over the years (“started out more rock ’n’ roll, and ended up with modern metal”). The late ’70s and ’80s musical timeframe must be a preference among the members of Skeletonwitch, but it definitely doesn’t define them.

Each song is the product of the full band with everyone contributing. Yet there’s never one of these five-headed creations that drags. Heck, on Breathing the Fire, there’s no track that reaches the 3:45 mark! Hedrick gives the credit to guitarist Nate Garnette, whose demo tapes are the seeds by which the band grows its doomy and imaginative mini-epics. “The way Nate writes … love ’em and leave ’em … get-in and get-out. We write more in a linear fashion than verse-chorus-verse-chorus. A song might start out with a solo, or not really have one.” And if you’re not so dogmatic that you need choruses or consistent song structures, then you’re in just the right place with Skeletonwitch.