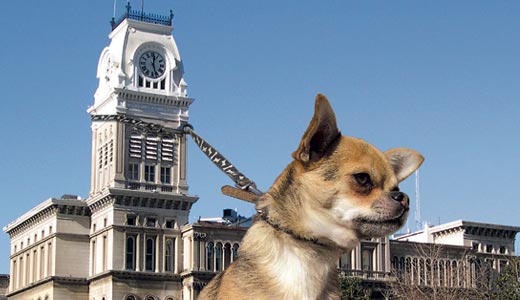 A crowd of employees and volunteers slowly filed inside the yellow trailer at Louisville Metro Animal Services’ Manslick Road compound early on Monday afternoon. I took a seat among them, amused at a small dog scurrying underneath the metal chairs, until I was ferreted out as a member of the media — notepads and digital cameras usually give that away. Back outside the trailer, I was greeted by fellow reporters who showed up (in vain) to witness the pep talk delivered by Mayor Jerry Abramson and incoming interim LMAS Director Wayne Zelinsky to the beleaguered public agency’s rank-and-file staff.

A source who attended the meeting, but who wished to remain anonymous, was impressed by what Zelinsky had to say, particularly his commitment to working with third-party animal “rescue groups,” which were severely alienated during the reign of Dr. Gilles Meloche, the agency’s embattled outgoing director.

However, the source would not comment further when asked to weigh in on the appropriateness of the leadership of Zelinsky — a former police captain and second-in-command to Meloche — who also is named in multiple lawsuits filed against the city and Metro Animal Services.

The volunteers I talked with essentially echoed what the source and Chris Poynter, a spokesman for the Mayor’s Office, said about the closed-door address.

“It’s just a staff meeting for Zelinsky to rally the troops,” Poynter said, “and to remind them that they have a job to do. The mayor wants to talk directly to the workers and hopes we can all move forward.”

And since Meloche resigned amid allegations of sexual harassment, civil rights abuses, needless cat torturing and generally running the shelter, meteor-like, into the ground, the impetus for the mayor to move forward from this stinking mess without answering any pesky, lingering questions has been unyielding. Meloche, whose resignation is effective Dec. 31, hasn’t given any interviews and was not present for that afternoon’s troop rallying, perhaps for obvious, bummer-inducing reasons. The assistant director of community relations, Jackie Gulbe, was not available for comment either, despite her office being located in the aforementioned yellow trailer. The same goes for Zelinsky.

Which made it all the more pertinent, then, to try and get some answers directly from Abramson, who showed up a good 15 minutes late to the event in a black sport utility vehicle, said his piece to the faithful, and then gave us media about 10 minutes to address three years’ worth of Melochian errors.

“They liked it when I called you ‘sons a bitches,’” Abramson joked while strolling down the wooden ramp, talking about how he referred to the press during his address inside the trailer. “No, I’m just kidding … actually, I’m not.”

Television crews at the ready, the vaudevillian then went to work.

“There’s been a lot of turmoil in this community around Metro Animal Services,” Abramson said. “We have an awful lot of men and women who are there doing a great job each and every day. I thought it was important to go out and tell them I appreciate the work they’ve done during these tumultuous times.”

All of which is true. When the line of questioning got specific, however — particularly about the 10,000 animal carcasses dumped every year into an Outer Loop garbage fill, and the “fully funded” $100,000 un-built crematorium that would alleviate this problem — Abramson ducked, weaved and stood his ground, saying that the economic recession, which has prevented construction on Metro Animal Services’ new Newburg Road facility, is gumming up the works.

“We’re gonna go ahead and put (the incinerator) here,” Abramson said. “The hope was we wouldn’t have to put it here and pay to remove it to relocate it to the new facility (off Newburg Road). That’s what we’ll be doing; we’re doing that as we speak.”

Then the talk turned to the sexual harassment lawsuit filed by former veterinary technician Dawn Simpson against Meloche, a suit that also names Zelinsky as a defendant due to his leadership role in the agency. Of course the mayor already had his answer (“I don’t respond to any lawsuits. They’ll be handled in the court system.”), even though Simpson’s initial complaint was the subject of a memo composed by Deputy Mayor William Summers in January 2009, well before the courts got involved.

Perhaps most egregious was the mayor’s adherence to Meloche’s abilities as a “change agent,” which is technically true, yet omits the fact that much of that change was detrimental to the lives and well being of humans and animals alike.

“If the definition of success out here is the adoption rate,” Abramson said, “then this place has been tremendously successful. It all depends on how you define success.”

Under Meloche, the adoption rate was considered high, which in large part contributed to the shelter’s myriad problems, as it doesn’t take into account quality of care or address the bigger problem of overpopulation, the result of inadequate spaying/neutering efforts.

Fortunately for the mayor, his definition ignores this.

The city has already allocated money for additional animal control officers to pound pavement under the new leadership of Zelinsky. Heating was recently installed at the main shelter after months of being inoperable. All of which fits the forward-marching, don’t-look-back-in-anger narrative that the mayor is desperate to instill at this point in his 2011 gubernatorial campaign with Gov. Steve Beshear.

Abramson thanked us, slapped me very hard on the back, and leapt into his SUV, leaving the same unanswered questions created in Meloche’s wake.