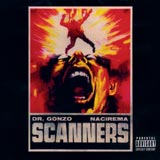 Apparently I’m not the only person out there who considers 2000’s Deltron 3030 to be one of the premier hip-hop records of the decade. Its balance of weird and street, mixed with otherworldly production and clever samples, was the epitome, and for me the peak, of “Indie Hip-Hop” (future argument to be made: After Deltron, Indie Hip-Hop became more a brand name and less the simple fact of making rap music on an independent label). Scanners seems to draw from a similar well and comes off doing a damn good job at it. Nacirema has been making records locally for a few years, slowly building a following for his abstract rhymes, clear voice and obvious love for the culture. Indiana’s Dr. Gonzo provides a bed of classic true-school boom rap, spiced with samples both well-known and obscure, all with the overlying concept lifted from the horror movie of the same name. Eighteen tracks including three instrumentals come together for one of the more enjoyable efforts of the year. Unexpected excellence.