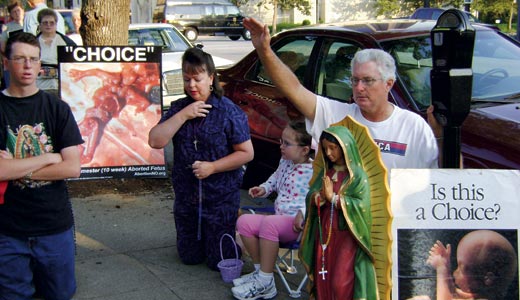 The downtown streets are mostly empty, and the sidewalks are free of the city’s office drones on this recent Saturday morning. But near the corner of First and East Market streets, a battle is already brewing outside the EMW Women’s Surgical Center, Louisville’s only abortion clinic and one of only two in Kentucky.

The sun has not risen over the city, yet droves of pro-life protestors are armed and ready for a fight: Self-proclaimed “prayer warriors” clutch their rosaries; some carry crosses and posters with graphic photographs of aborted fetuses. They recite the Hail Mary in a constant rotation. Meanwhile, pro-choice advocates in fluorescent orange vests with the words “Clinic Escort” imprinted on the front mill around the perimeter; their job is to help patients trek through the turbulent crowd.

Although the scene outside the surgical center in Louisville is typically rowdy, the clash between activists on the front lines has intensified recently given the current political fight over a woman’s right to choose. On Nov. 7, the U.S. House of Representatives passed a massive health care reform bill, which included an amendment that’s considered a major blow to abortion rights. Dubbed the Stupak Amendment after its lead sponsor, Democrat Bart Stupak of Michigan, the measure precludes the proposed public health care option, as well as any policy purchased with federal subsidies, from covering abortions.

And while this amendment suggests there’s a movement afoot in the nation’s capital to scale back accessibility to abortion, Kentucky is already among a contingent of socially conservative states that make it especially difficult for a woman to terminate her pregnancy. For example, the commonwealth requires a 24-hour waiting period before a woman can get an abortion. State law also requires mandatory counseling, and married women seeking an abortion are forced to notify their spouse, an arcane law that is largely viewed by legal experts as unconstitutional. The availability of abortion services also is an issue in Kentucky, where only two of the state’s 120 counties — Jefferson and Fayette — have an abortion provider.

But even in the two counties where abortions are available, fierce protests often make it difficult for women to access services. On some days, demonstrators literally create a physical barrier, in addition to the emotional strain they seek to inflict on women, hoping to make them reconsider.

“These people have to walk through this gauntlet of judgment and harassment,” says Ken, a volunteer clinic escort who asked that his last name not be used, citing concerns that his pro-choice stance might interfere with his professional life. “There’s the soapbox preacher guy yelling and Angela (another regular protestor) preaching on opposite sides of the sidewalk. It’s like dueling damnation.”

Because the clinic does not have private parking, clients are forced to fight through the crowd, which lines the block on most Saturdays. The protestors alternate between reciting prayers and chanting, “Don’t kill your baby,” while some point to disturbing images of aborted fetuses. More outspoken protestors rant about how these “sinners” will pay for their selfish decision in the afterlife.

Because Kentucky does not require a buffer zone around its two abortion clinics, volunteer escorts surround patients to provide a sense of security. With a handful of aggressive protestors in the mix, however, the situation sometimes gets physical; a few escorts say they have been shoved out of the way so pro-lifers can verbally accost the women.

“It’s about being a bully and not showing compassion or giving information,” says Aundria Radmacher, a client escort organizer. “We will walk beside these women and support them in any decision they make.”

It was that type of intimidation that inspired Jane to become a clinic escort. Last year, Jane supported her daughter’s decision to have an abortion and accompanied her to the appointment. Just before they entered the building, a man stepped in front of them and blocked the entrance, aggressively trying to change her daughter’s mind.

“These women are already in a stressful situation, and they’ve agonized over the decision,” says Jane, who asked that LEO not use her last name to protect the identity of her daughter. “I know my child did.”

One block away from the EMW Women’s Surgical Center, a Christian-based crisis pregnancy clinic provides information about abortion alternatives. Pro-life protestors often try to convince women visiting the abortion clinic to instead speak with a counselor at the Woman’s Choice Resource Center, which refers clients to adoption agencies.

The pro-life medical clinic offers pregnancy tests and ultrasounds, and provides free, basic baby supplies, such as diapers and clothes. Over the past two decades, employees with the resource center have counseled thousands of clients, with about 5,000 women opting against having an abortion as a result, according to Executive Director Monica E. Henderson.

“We had a 15-year-old girl last week with her mother who drove 100 miles from the city they live in because she was raped,” says Drew Peterson, who sports a pink “Trust Women” sticker on his clinic escort vest and is a member of the Kentucky Religious Coalition for Reproductive Choice. “She was already traumatized, and now she’s being traumatized further.”

Elaborate props are regularly displayed near the clinic entrance on East Market. On this day, there’s an especially large Virgin Mary statue. One protestor carries a giant crucifix on his back with a baby doll attached, surrounded by anti-abortion messages.

“Sometimes I wonder, ‘Are these people for anything, or just against everything?’” says Anne, counseling director of EMW Women’s Surgical Center. Although she has been with the clinic for about 10 years, Anne agreed to speak with LEO on the condition that her last name not be used.

At the clinic, Anne is responsible for ensuring patients are comfortable with their decision to have an abortion. In addition to enforcing the 24-hour waiting period and state-mandated counseling session, Anne says she is careful to look for signs that a patient is under any pressure. If she suspects a woman is being influenced or is otherwise hesitant, the procedure will not be performed.

On days when the clinic is open, there is always a crowd of demonstrators outside. And while some protestors scream about murder and eternal damnation, others take a decidedly more passive (and arguably more Christian) approach.

“I come to be a silent witness for the babies that go in,” says Lisa Roll, who woke up at 5 a.m. on this Saturday morning to travel from Corydon, Ind. “The women aren’t given enough information. We just want to make them pause.”

It’s a sentiment shared by Stacy Hare, a 20-something pro-life demonstrator outside the clinic.

“I’m a Christian, and I believe the Bible specifically says speak for those that cannot speak for themselves and defend them,” says Hare, describing herself as a frequent peaceful protestor, saying she simply is here to help: “It seems like the lord has a heart for the helpless. We come down here to at least try to do our part to help the helpless.”

And while the protests have grown increasingly volatile in recent weeks, many of the regular activists on both sides of the issue now know each other on a first-name basis, which has been helpful in de-escalating scuffles outside the clinic.

“My heart goes out to these babies,” says Dale Cary, an ardent pro-lifer who regularly protests outside the clinic. “If you don’t want to raise that child, let someone else raise them. That child is innocent.”

As Cary prepares to head home after spending several hours outside the clinic, he waves to one of the volunteers wearing an orange vest and shouts, “See you next week, Dan!”

“See you next week, buddy,” says Dan Rudyik, who has been working as a clinic escort for years. Explaining why he volunteers for the pro-choice movement, Rudyik says, “I can sum up why I escort in three words: compassion, mercy and charity. These are probably very similar to reasons you’ll hear from the pro-lifers, but the difference is that we focus these values on the living, breathing woman walking into the clinic, and the pro-lifers focus on an unborn fetus.”