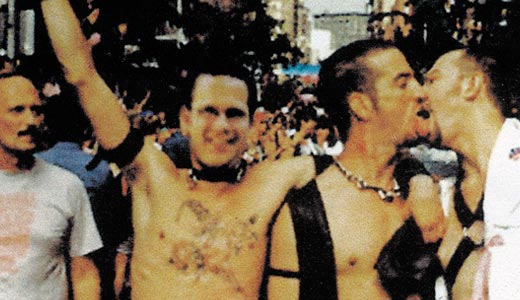 This doctored photo appeared on a homophobic campaign flyer that many believe cost Metro Council candidate Ken Herndon the race.

Last spring, Ken Herndon made a serious bid for the Metro Council’s 6th district seat. The candidate worked diligently to unseat Democratic incumbent Councilman George Unseld, who had longstanding ties to the community and wide-ranging support among neighborhood associations and city officials. Unlike the usually sleepy council races, the primary battle was hotly contested and closely watched.

But the weekend before the election, voters opened their mailboxes to discover a malicious campaign mailer — a glossy, double-sided, high-priced flier — that featured a photo of Herndon’s face transposed atop the body of a man embracing two other men kissing at a gay-pride parade. Among other homophobic jabs, the mailer read in bold letters: “(Herndon) wants us to elect him because he designed new garbage cans?! I guess when you live a life of trash you become pretty familiar with garbage cans.”

Unseld quickly denounced the material and denied any connection. Regardless of who was behind the slimy hit piece, however, it worked. When the polls closed, Unseld won by a razor-thin margin, beating Herndon by 112 votes. Many observers said the mailer cost Herndon the race.

“It was the most vile piece I’d ever seen, especially for a local race,” says Herndon, who is gay. “Politics can be hardball, but pasting someone’s face on another body and making things up was rather stunning, quite frankly.”

A year ago, Herndon filed a defamation lawsuit in civil court against a John/Jane Doe, giving him the power to subpoena witnesses. Since then, the defeated council candidate has conducted a thorough investigation, which has included the sworn testimony of public officials and political operatives in an attempt to uncover who produced, paid for and distributed the flier.

This week, Herndon filed much of the evidence he has gathered with the court, and the results are compelling to say the least. In the absence of a smoking gun, however, Herndon has suspended the investigation and voluntarily dismissed the case, with the hope of resurrecting it if someone comes forward with additional information.

The investigation began with the mailer itself, which according to a line on the attack piece was paid for by a group called “Citizens for Family and Moral Values.” It turned out no such political group is registered with the state.

From there, Herndon’s investigation zeroed in on his primary opponent, resulting in compelling, albeit inconclusive evidence.

According to records in the court file, one of Councilman Unseld’s key supporters — then-Council President Jim King, D-10 — was seen with a copy of the mailer before it was disseminated. In a signed affidavit, attorney Matt Conway, who was working as chief of staff for King at the time, stated that he saw a color copy of the mailer in his boss’s office at least a week prior to when the attack piece made its inglorious public debut.

Apparently, Conway did not realize exactly what the mailer was until later reading about it in LEO Weekly.

In a telephone interview, Jim Straus, an attorney for King, says his client had absolutely nothing to do with the mailer, and that he would have no further comment until reviewing the case file.

Long before the attack piece arrived on doorsteps, Councilman King had attempted to persuade Herndon to quit the race, according to the affidavit of Jeff Noble, Herndon’s campaign manager. In the affidavit, he says King called him and demanded that Herndon drop out: “King said that Ken could not win and should get out of the race and that he would like to meet with Herndon, and that ‘If George (Unseld) drops dead’ after being re-elected, King would guarantee that Herndon will get the appointment …”

In an open records request made last year, LEO Weekly discovered that three weeks before the election, King sent a letter to Herndon’s employer — the Louisville Downtown Management District — saying he’d “received several inquiries regarding the propriety of an active employee … participating in a primary election as an opponent of an incumbent Metro Councilman.”

During an interview with a private investigator earlier this year, King’s legislative aide, Rob Holtzmann, reportedly confirmed that King had tried to use Herndon’s employment as leverage to force him out of the race, according to the affidavit of Noble, who was present at the interview. Noble also says during that interview Holtzmann indicated the pressure was coming from higher levels of Metro government.

“Holtzmann indicated that people in the Mayor’s Office were pushing King to take this action,” Noble also says in his affidavit.

Mayoral spokesman Chad Carlton says he cannot comment on an ongoing legal issue, although he acknowledges the mayor has long supported Councilman Unseld.

Despite compelling evidence suggesting King and possibly the Mayor’s Office wanted Unseld to stay in office, it remains unclear who actually created the mailer. And with dwindling resources, Herndon’s 14-month investigation is coming to a close, at least for now.

Because Herndon has not yet been able to identify the source of the mailer, he is dismissing the civil lawsuit. Before doing so, he filed the evidence he gathered with the court, making it public record.

“When you denigrate somebody’s reputation — particularly in a libelous or untrue fashion — there are consequences. There is a reason why people aren’t raising their hands saying, ‘I did this,’” says Bobby Simpson, Herndon’s attorney. “I just don’t believe the community would approve of the people who did this. There might be a segment, but the majority don’t approve.”

Despite alleged efforts to keep him out of the race and a nasty personal attack, Herndon still wants to serve on the Metro Council. He also says finding the source of the mailer has never been about a personal vendetta, but about preventing the same tactics from being used against future political candidates.

“I quite frankly know that mailer cost me the race,” Herndon says. “But I promised my supporters, the constituents of the 6th district and the community at large that I was going to do a thorough investigation and do the best I could to find out who did it.”

It has been widely reported that Councilman Unseld will not seek re-election in 2012, and Herndon has already filed a letter of intent to make another run for the 6th district seat: “I ran before and damn near won anyway, despite the piece. So I think I’ll be in a really strong position to win next time.”