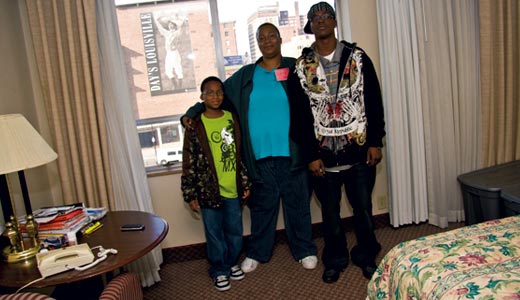 Anita Foster and her two sons, Deyonte, 16, and Anthony, 10, are nestled in a cozy hotel room with a view of downtown. The two-bed room is small, but tidy, with only a few homework notebooks and school supplies scattered across the table.

In the spring, the 34-year-old Gary, Ind., mother moved her family to Louisville looking for work, but was unable to find an affordable apartment. For a while they lived with Foster’s sister, but that arrangement soon became too crowded. Foster then contacted Wayside Christian Mission, where the family spent six months before checking into Hotel Louisville on West Broadway.

“My children see what I’m going through right now, but it will hopefully inspire them to prosper more in life and make sure they’re not in the same situation later in life that we’re in now,” says Foster, dressed casually in navy blue slacks and a heavy winter coat. “They also see that we could be living in a car or (on) the street, but I’m doing the best I can do to make sure they’re safe.”

More than 80 women and children who would otherwise be homeless are currently staying at Hotel Louisville, which Wayside bought at auction for $10 million earlier this year with the hope of turning it into a family shelter. The purchase caused quite a controversy, however, with critics complaining that a “mega-shelter” should not operate so close to a busy downtown thoroughfare, and suggesting that the nearby Jefferson Community and Technical College should instead get the land. Since then, Wayside’s plans have been delayed while the city tries to figure out whether the property is properly zoned to function as a shelter.

But rather than wait any longer for a decision, the nonprofit group recently began running an ultra-cheap hotel for the homeless at the site. Wayside is now offering residents at their emergency shelters space at Hotel Louisville for the bargain price of one penny per night.

Not surprisingly, the shrewd business move has angered Wayside’s critics, but officials with the nonprofit say they had no other choice, particularly as winter approaches.

“We know there are families living in cars, living in campsites and in buildings with no utilities,” says Nina Moseley, chief operating officer of Wayside. “And we have faced nothing but obstacles to try to even get in here. It’s what we’ve been saying all along. They’re kicking us to the curb. They obviously don’t want us downtown or anywhere visible.”

Last year, Wayside attempted to buy the former Mercy Academy building on East Broadway in the Original Highlands, with plans to turn the campus into a family shelter. The Original Highlands Neighborhood Association vehemently opposed Wayside’s plans, claiming the mostly residential neighborhood was an inappropriate place for such a facility. Wayside asked Metro Planning and Design to weigh in, and ultimately the department determined a shelter was indeed an appropriate use for the site. But the neighborhood association successfully appealed the ruling to the Metro Board of Zoning Adjustments, and Wayside abandoned its quest to operate at Mercy.

Upon overturning the decision, the Board of Zoning Adjustments also created a task force to determine how homeless shelters should be classified under city zoning law. The task force is not expected to meet until early December, meaning it could take months before any recommendations are made.

As a result of the anticipated delay and the looming winter weather, Wayside found a loophole allowing them to provide shelter for the homeless at Hotel Louisville, an idea Moseley says Charles Cash, director of Metro Planning and Design, actually endorsed.

“Nobody in this city, no politician or resident, wants a national headline that says a child has frozen to death,” says Moseley. “Imagine if we’re sitting here with a beautiful 12-story hotel just waiting, then to have a child freeze to death. That would be a crime in my book.”

Earlier this year, Wayside successfully bid on the Hotel Louisville building at auction with a plan to turn the 287-room high-rise at Second and Broadway into a shelter for homeless women and children. Almost immediately, the nonprofit was met with resistance about putting a “mega-shelter” in downtown Louisville.

State leaders said Jefferson Community and Technical College needed the land to expand its nearby campus and threatened to use eminent domain to secure the property. City officials openly questioned whether the 2.9-acre plot was an appropriate place for a shelter.

Metro Councilman Tom Owen, D-8, who initially criticized Wayside’s penny hotel idea as a publicity stunt, says he believes it was inappropriate for Wayside to sidestep the zoning process and operate as a hotel. Although Owen initially opposed Wayside using the property in any capacity, he now supports the possibility of the nonprofit sharing the land with the college.

Other council members believe the city needs to seize this opportunity to be innovative and partner with the nonprofit.

“Instead of working to put this together, we’re working to fight Wayside,” says Councilman Hal Heiner, R-19, who is running for mayor, adding the city could forge a partnership with Wayside and Jefferson Community and Technical College to help pull people out of homelessness. “You know we are a compassionate people here in Louisville. I just don’t feel like Metro government is reflecting the people of this city at this point.”

Though Wayside’s move has upset some city officials, it has inspired other nonprofits and grassroots organizations to find innovative ways to get things accomplished when faced with roadblocks.

“I was personally impressed and excited. There was a need, and they dealt with it. People get caught up in red tape and things don’t get done,” says Khalilah Collins, executive director of Women in Transition, a group that deals with economic justice, adding that other organizations need to take a cue from Wayside. “The city wants to zone homeless shelters away from downtown. We cannot continue to hide poverty and hide homelessness because that’s not fixing it.”

And despite worries that homeless people would be walking up and down West Broadway, the families living in the hotel aren’t coming straight off the street. Only the more stable residents who are ready for transitional housing are allowed to move into the hotel, where the rules are strict.

Despite Wayside’s penny hotel success, hurdles remain, including a provision that says occupants must check out for at least one night every 30 days. Those living in the hotel say they’ve already set up arrangements with friends and family, but they feel it’s another unnecessary measure that just adds to their struggles.

“We’re not bad people. We’re good people who just hit a downfall,” says Monica Robinson, who lives in the hotel with her two daughters, Bridgette, 15, and Alyssa, 8. “We’re working our way up. The Moseley’s and Wayside are helping us get back on our feet.”

Robinson’s former roommate at the emergency shelter, Sherita Mason, 32, says living in the hotel provides families with a clear path to better housing. At the crowded emergency shelter, families have to share rooms, which means a difficult negotiation of schedules and rules.

“You are more comfortable with having your own space and room for your family to spend quality time with your kids,” says Mason. “It’s almost like having your own place again even though you’re still in a shelter.”

Mason struggled with depression when she first moved into the shelter with her two daughters and didn’t leave her room for an entire month. Although she’s grateful for what Wayside is doing, she cannot understand the negative reaction to the shelter being moved downtown.

“We’re not bothering anybody. We come like we’re supposed to and follow the rules,” she says. “Getting rid of this hotel would be devastating. It would say there’s no hope, that if you are trying to bring yourself back up, that you’re supposed to stay down where you’re at and be stuck.”