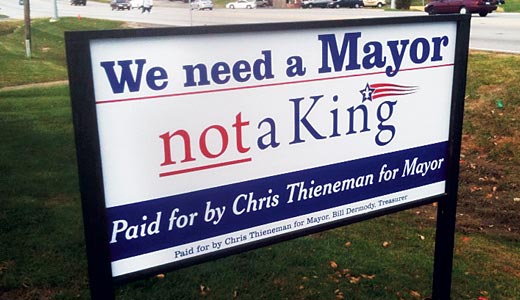 A stretch of several blocks near Eastern Star Baptist Church has experienced flooding many times over the past 45 years, says the Rev. Alex Moses. Most recently, the Aug. 4 flash flood that struck Louisville caused major damage, and the California neighborhood minister says the area is still being affected due to an exodus of residents — mostly renters — particularly along a stretch of Maple Street, where a number of houses are noticeably vacant.

“I’m troubled simply because it’s going to invite vagrants to come in and set up shop,” Moses says. “You could have vermin and fires. No telling what will happen because those houses are vacant there.”

These were among the many frustrations and concerns voiced during a recent meeting of the Metro Council’s Committee on the Flash Flood of 2009, formed to gather input from residents and Metropolitan Sewer District officials in the wake of the unprecedented rainstorm. Last Monday, the panel held its final meeting and made several recommendations to MSD that will be presented to the full council in the form of a resolution.

Included in the package of suggestions is a proposal for the city to buy flood-prone properties in south and west Louisville, a plan endorsed by MSD.

The details are still sketchy at this point, but the buyouts would be voluntary and contingent upon the amount of federal funds MSD receives. Several council Democrats have voiced support for the idea, but they want to ensure the buyouts are fairly priced so residents can find new housing.

In addition to considering buyouts, council members also want to make sure MSD is working to prevent this type of damage in the future.

“I don’t know if we’ll get another 6.5 inches of rain in an hour anytime soon, but I think there’s an awareness now in how they’re trying to overhaul the sewer system,” says Tony Hyatt, Democratic caucus spokesman.

Though these steps are encouraging, community activists in the California neighborhood say action is long overdue. Khalilah Collins, executive director of Women in Transition, a group that deals with economic justice, says drainage, flooding and sewer backup have long been problems, and city officials should have fixed the sewers decades ago.

“I remember as a teenager living near Victory Park that it was always flooded in the (California neighborhood),” Collins says. “It isn’t the last few years, either. This has been going on for the past 20 years, and it’s no new problem. It just gets worse and worse each time it rains.”

Last week, the Jefferson County Republican Party voted to welcome back mayoral candidate Chris Thieneman, who was previously banished from the party after a number of public betrayals, including head-butting with U.S. Sen. Mitch McConnell.

In January 2008, Thieneman challenged former U.S. Rep. Anne Northup in the GOP primary, and accused McConnell of trying to push him out of the campaign. Before dropping out of the race, the former U of L football player publicly switched parties, then went on to endorse Democrat John Yarmuth, who ultimately defeated Northup.

Although Thieneman quickly recanted, it was too late: Party chairman Jack Richardson more or less disowned the rogue Republican and moved to strip him of his position as a GOP legislative district chair.

“Those were issues that happened years ago, and I wanted to make the record clean as we go into 2010,” says current Jefferson County GOP chairman J.T. Miller, who made the motion to bring Thieneman back into the fold. When reminded that the dustup actually transpired early last year, not years ago, he acknowledged that regardless, it’s time to move on: “It’s no question if we are to be victorious in 2010, we have to be unified. Anything we can do to get more unified by healing old rifts is certainly something we need to do.”

Lifting the Thieneman ban attempts to bridge the gulf between the party’s estranged factions, which a Republican candidate will need in an uphill bid for mayor — Louisville hasn’t had a Republican mayor in four decades. The rift represented a larger fracture between the party’s affluent northeast base and its working-class grassroots voters in the southwest, which is Thieneman’s unofficial political headquarters.

“It ought to show that establishment Republicans who thought I was too outspoken don’t think that as much anymore,” Thieneman says. “They embraced me back in and they realize I’m a serious candidate. I’ve shown them that I’m a good Republican.”

The boost from the establishment helps Thieneman, but don’t expect it to change his style. After being absolved, he unveiled an attack that slams mayoral candidate and Councilman Jim King, D-10. The bumper stickers and yard signs Thieneman paid for read in bold letters: “We Need a Mayor, Not a King.”

“I’ve had so many people ask me what is the biggest concern for the future of Louisville and what is your biggest worry. And I have said, ‘Jim King being our mayor,’” he says. “I don’t want to wait until after the primary to get that message out. It has to be heard right now. We need to get the word out at the grassroots level that King’s money is not going to buy our vote.”

Instead of hitting back, the King campaign called Thieneman’s attack unusual this early in the race, spinning the jabs as a form of flattery.

In a statement sent to LEO Weekly, a King campaign spokesman said, “We have to believe he sees us as the frontrunner not just in our primary, but as an appealing candidate to both independents and Republicans in the general election as well.”