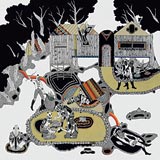 Have you ever wondered what it would sound like if Emmylou Harris, Rosemary Clooney and The Frames were all thrown into a proverbial blender? I can tell by the look on your face that you have. It would sound a lot like Espers’ third album, simply titled III. The music is varied, and often eccentric. The guitar and cello unite to create an atmospheric dynamic, while the rhythm section tinkers with vintage tempos just beneath the surface. The duel vocals of Meg Baird and Greg Weeks, however, are the showpiece of this album, especially on songs like the Eastern-influenced “That Which Darkly Thrives.” The desperate and forlorn vocals on “Another Mood Song” will have you crying Baird’s tears for her; while the spacey “The Pearl” leaves you feeling weightless against their brooding ambience.