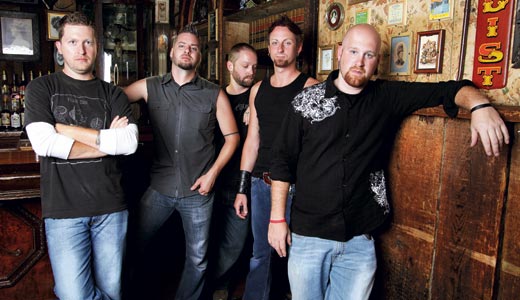 Back in the fall of 2006, Louisville’s original hard rock music scene got a much-needed jolt, when former members of the widely popular band Breckinridge and The Constant resurfaced and announced they were joining forces and calling themselves Heaven Hill.

Based on prior successes of Breckinridge, Heaven Hill was immediately pinned with parallel expectations by many in the hard rock music scene. Now, three years later, it is safe to say they have met those expectations. Eddy Schreyer of Oasis Studios (Prince, Akon, System of a Down), who mastered Hill’s debut, Somewhat Civil, said, “I wouldn’t be surprised if these guys put another album on my wall.”

Heaven Hill also achieved regular rotation on Louisville’s 93.1 The Fox for about a year with their song “Going Down,” which peaked at 38 spins per week. Then, after being added to regular rotation at other active rock stations in Raleigh, N.C., and Lafayette, Ind., among others, “Going Down” cracked Billboard’s Active Rock singles chart at No. 37 and remained there for two weeks. This smidge of national industry attention fueled their aspirations for a major label record deal.

LEO: What does Ivan Arnold bring to the band that’s different?

Chuck Willis: Ivan was our No. 1 choice. So, long story short, we started looking at videos of him, trying to get a scope on if we should even call him, and then one of the videos that we saw, he says something like, “I’m Ivan Arnold, and if you don’t know who I am, then fuck you!” (laughter) Immediately, all of us were like, “He’s in! He’s just like us.”

Teague Ridge: I kind of have a serious answer on it. Everybody that knows Ivan and knows him musically knows that he’s a great drummer. We didn’t lose anything in that aspect. But what he’s brought outside of playing music has been the biggest surprise … and the best thing so far is, not only can we hang out with him now, he fits with the five of us perfectly. He brings experience from other bands, connections from other bands — stuff that he can network for us to help us progress our career. He’s really stepped up to the plate and done a lot of that.

LEO: Is there a new album in the works, or are you guys only concentrating on pushing Somewhat Civil still?

LEO: Where do you expect this band to be two years from now?

Kris Kerr: I expect to be on “MTV Cribs” with a bunch of strippers, sponsored by Budweiser.

CW: Making an honest living and writing music with this same lineup. I don’t care if it’s a massive killing. But obviously, I would love the Budweiser sponsorships and the “MTV Cribs,” but I’d love to be able to see this band just make a damn living. You know? A good living, at that.

Ivan Arnold: Headlining the Family Values tour in Japan, and Korn’s gonna open for us.