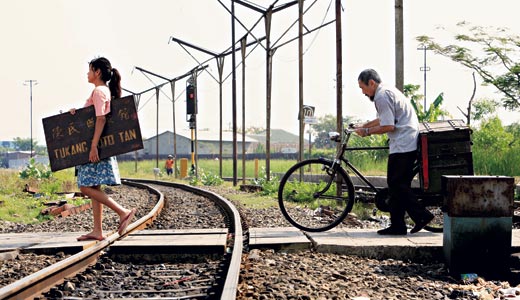 It snows in Iran. This is probably not a concept that drifts to the front of our minds when we consider the region. Enriched uranium, maybe. But snow? And yet, as the film “Those Three” shows us, snow can be a big thing in Iran. For Youssef, Essi and Darius, military deserters lost in the North, snow is the only thing.

One reason to watch foreign films, particularly those from countries that don’t distribute a lot of them, is to compare our perception of a place with what we are witnessing on screen. Being entertained while having our impressions challenged or confirmed is a satisfying way of gaining perspective. The Louisville Film Society’s offering of the Global Lens Series has presented us with 10 opportunities to do just that. Billed as a touring film exhibit, Global Lens screenings continue Sundays through Dec. 6.

“The series offers Louisvillians a chance to engage in cinema that is made in a radically different manner,” says Ryan Daly, director of programming for LFS. “When we watch a film from a country we know little about, we may not walk away with an expanded sense of geography or a better knowledge of dialects. What we can discover is that they are not so different, but that we all are so similar.”

Will Louisvillians take advantage of the series? Following an under-attended screening last Sunday of “Possible Lives,” a small, Argentinean gem, the consensus among audience members was: thought-provoking content, good venue but a tricky schedule. “This time of year, it’s hard to bring people out on a Sunday afternoon,” said one viewer, on what was perhaps the last 70-degree day of the year. Bill and Judy Werst, retirees who’ve returned home to Louisville, echoed the sentiment. For these series-pass holders, Global Lens fills a void left by programming changes at Baxter Avenue Theatres. “For us, it’s been Netflix,” Bill offered. Still, the Sunday screenings have not been ideal for these two enthusiasts.

There is an appetite for this cinema, and Tracy Heightchew, LFS’s director of marketing, says Global Lens is here to stay. She expects the series will grow as word of mouth spreads. Attendance is also likely to benefit from a Friday or Saturday night showing. An introduction before each film would be another nice touch, as the screenings of “Possible Lives” and “Mutum” (Brazil) that Sunday could have used a face.

Here are capsule reviews of the last few films of the series:

“Those Three” — A neat example of modern Persian Cinema, “Those Three” follows a template set by Palme D’Or winner Abbas Kiarostami, in which landscape, poetry and a meditative tone are featured. Also typical of the nation’s films is the use of allegory as censorship work-around. Viewers are left to ponder: Is this film about a doomed escape in unrelenting snow or the hopelessness many young Iranians feel in their quests for freedom? Shows Nov. 22 at 1 p.m.

“Getting Home” — Chinese comedies are rarely screened in the United States, making “Getting Home” a noteworthy selection. Fortunately, its novelty isn’t the only reason to see it. The gags are expertly timed and often delightful, thanks in part to Chinese sitcom actor Zhao Benshan. He manages to carry the film, despite playing opposite a corpse for most of it. At his best, Benshan is warm and jocose, and his physical comedy feels descendent of Chaplin. We should hope to see more of Benshan and this genre. Shows Nov. 29 at 3 p.m. and Dec. 6 at 1 p.m.

“The Photograph” — Despite a smattering of stock-story elements (an Indonesian hooker works to get Grandma an operation), this is one of the surprises in the series. Sita’s time at the brothel is shown in sumptuous color, and director Nan Achnas (one of five women filmmakers included in the series) handles her characters’ struggles tastefully — though not at the expense of grit. Sita is paired with Mr. Johan, her aged landlord and the local photographer. Their uncommon relationship is touching and occasionally punched with humor. Shanty and Kay Tong Lim are both memorable as Sita and Mr. Johan. Shows Nov. 22 at 3 p.m.

“Sleepwalking Land” — In fleeing war-torn Mozambique, a nomadic uncle and nephew unwittingly walk in circles in their search for the sea — evoking the film’s disorientating walls of snow. The pace of this unusual film can feel deliberate, but it’s worth settling into. The stiff establishing moments give way to a compelling and occasionally unnerving magic-realism. The story turns many corners where unexpected characters are never far away. Shows Nov. 29 at 1 p.m. and Dec. 6 at 3 p.m.