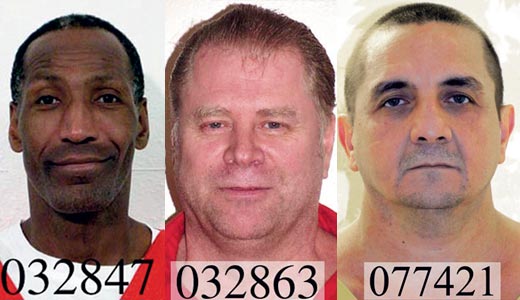 Courtesy of Department of Corrections

Kentucky has executed only three prisoners over the past four decades, with two of those inmates actually expediting their own demise by waiving all appeals and volunteering to die.

In fact, when compared to the 35 other states that still dole out death sentences, the commonwealth is remarkably measured (relatively speaking), ranking 26th in our rate of executions, according to the Death Penalty Information Center.

If the state attorney general has his way, however, Kentucky might soon climb in that grim ranking.

On Monday, Attorney General Jack Conway asked the governor to set execution dates for three death row inmates — Gregory Wilson, Robert Foley and Ralph Baze Jr., arguing they have exhausted all of their “matter of right” appeals in both state and federal courts.

“In requesting these death warrants, I am performing my solemn duty as attorney general to enforce the laws of the commonwealth,” Conway said in a statement announcing his request. “The horrific crimes these men committed have taken an enormous toll on the victims’ families, for whom this may bring closure.”

In response, two of the state’s leading public defenders and a dozen attorneys not directly involved in these cases are beseeching Gov. Steve Beshear to reject the request and call for a moratorium on capital punishment in the state. Specifically, they want Beshear to refrain from signing any death warrants until the American Bar Association completes a recently launched assessment of Kentucky’s death penalty system.

The American Bar Association — which has no official stance on capital punishment — has appointed a 10-person panel of legal experts, including lawyers, former judges and professors, to study the state’s death penalty protocol. In recent years, the ABA has conducted similar studies in other states, including Indiana, Ohio and Tennessee.

In a letter asking Gov. Beshear to temporarily halt executions, Public Advocate Ed Monohan and Louisville Chief Public Defender Dan Goyette (who is representing Wilson) highlight the fact that of the 50 Kentucky death sentences reviewed by the state Supreme Court and the U.S. 6th Circuit Court of Appeals since capital punishment was reinstated in 1976, 42 have been reversed.

“The error rate in Kentucky capital cases over the last 33 years is stunning and unacceptably high. It is compelling evidence that indicates the system is broken,” they write. “For all these reasons, we should not proceed with executions until this independent evaluation is completed and we are assured that due process has been fully and properly provided in each and every case.”

That sentiment was echoed in letters sent to the governor by a group of 12 prominent lawyers from across the state and the Kentucky Coalition Against the Death Penalty.

As for whether Gov. Beshear will actually consider a moratorium, spokeswoman Kerri Richardson says: “While the governor is willing to look at any recommendations on how state government can improve its operations, he remains committed to enforcing the death penalty for violent and heinous crimes and reviews each case to see if extenuating circumstances exist.”

That statement doesn’t exactly bode well for proponents of a moratorium, nor do the past actions of politicians in neighboring states. Take, for example, Tennessee: Upon completing an exhaustive study of the Volunteer State’s execution protocol in 2007, the American Bar Association declared the state was “woefully out of step with the national standards,” and as a result asked the governor to extend a moratorium to allow more time to fix the problems. Gov. Phil Bredesen refused, and proceeded to sign a death warrant the following month.

And while it’s been clear for some time that several Kentucky death row inmates have been approaching the end of their appeals, lawyers and abolitionists say they are shocked that Conway would request three execution dates at once.

“I think it’s surprising and unexpected and very premature,” says David Barron, a capital post-conviction attorney who is representing Ralph Baze Jr. “To my knowledge, there has never been a situation where three execution dates were requested at the same time.”

Barron points out that his client — who was convicted of murdering a Kentucky sheriff and a deputy in 1992 — has unresolved appeals, including one that the state Supreme Court has been considering for more than a year. Among the issues being considered in that appeal is the fact that the public has never had an opportunity to weigh in on the state’s lethal injection protocol.

At this point, Barron says he is unsure whether he will personally reach out to the governor on behalf of Baze. When asked whether he agrees with the prospect of a moratorium that would temporarily suspend all executions, he says, “I think it would be appropriate. There are systemic and significant problems with the administration of the death penalty generally, and particularly here in Kentucky, that should be addressed before any executions should proceed.”