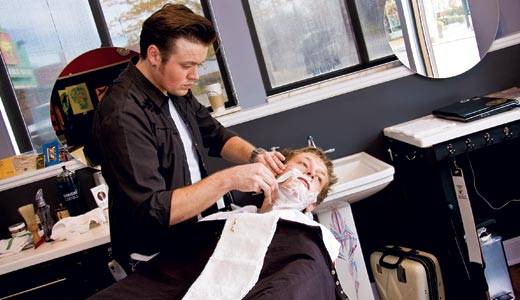 I recalled that day when my girlfriend, on a recent morning, complained that the whiskers of my beard infiltrated her nostrils when kissing. I had tried to trim my own beard once before with a Walgreens beard trimmer with catastrophic results; I wound up shaving a half-dollar sized splotch. Faced with the bearded man’s dilemma of having to forego kisses from the girlfriend or find a way to trim my whiskers, I thought of Derby City Chop Shop, the new barbershop on Bardstown Road. A friend had told me it was strictly for dudes. I wholeheartedly endorse this sentiment, and so I decided to give the place a try.

When I walked in, an alt-country band blared from the jukebox in the back. I’d never heard them, but they were onto something. The whine of a pedal steel guitar over a shuffle beat echoed from the ancient speakers and I felt instantly at home. Handbills and flyer art for both current acts and long-disbanded punk rock icons adorned the dark walls. Tattoo artist Adam Potts had taken the duty of designing the shop’s signs, something any muscle car fanatic would have wet dreams about.

The barbershop was busy, with several men waiting in the comfortable red chairs and on the denim-cushioned couch against the wall. I took notice of the fact that there were no women around. This was a man’s safe haven from the grindstone of home life, from the women we gratefully — yet sometimes begrudgingly — allow to run our lives.

When it was my turn, a young man with short brown bangs, tattoos on his biceps and a cherubic face led me to the barber’s chair. Without having to ask him, he informed me that he felt Derby City filled a void in the Highlands of a place to go for dudes. I agreed with him; we proceeded to discuss everything from women to music. Literally a half-dozen bands I’d never heard of came on the jukebox, the majority of which I thought were amazing. I’d ask Adam who was playing and he’d name some group I’d never heard of, being a cave-dwelling introvert. Drag the River was the one that got me, the one that’d been playing when I walked in.

The trim didn’t take long — 15 minutes tops. It was exactly what I’d asked for. I wanted the beard to stay full but tame enough to where it didn’t infringe on my daily life, from kissing to sipping coffee. Success.

The prices are also reasonable: A haircut is $15; outline (“in-betweener,” cleanup around the ears and neck) is $7; a beard trim is $5 and up, depending on the detail involved; a straight razor shave (head or face, including hot towels, hot lather, etc.) is $15; a shoe shine is $7; and a boot shine is $10.

As I paid, I told Adam I might do a story on his place. He shook my hand firmly and thanked me for the business. I said I would be coming back, not to worry. I’ll probably make it one of my few regular haunts and overstay my welcome.