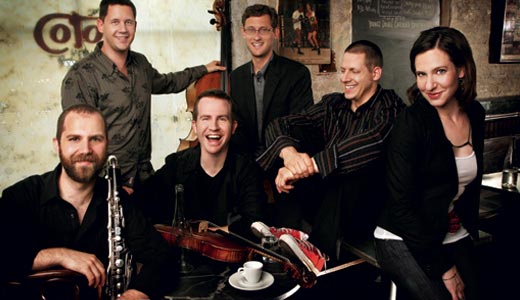 There’s a snippet of video out there somewhere of Eighth Blackbird rehearsing a piece. A violin, cello and piano player are working away at their notes, and here comes a clarinet player just walking right through the bunch of them, tooting along as he goes. A pretty relaxed atmosphere, you’d have to say, at the Eighth Blackbird practice aviary.

But it’s not just a loose rehearsal with a casual clarinetist. That’s the way Eighth Blackbird will perform the piece — with choreography.

“That must be the Adés piece, because that’s what I remember about the stage direction and music,” says clarinetist and U of L music professor Dallas Tidwell, who booked Eighth Blackbird for a Chamber Music Society performance here Sunday. Tidwell says he especially recalls the work — “Catch,” by English composer Thomas Adés — because his own chamber group considered playing it. “I remember for a while there I’m the antagonist,” he says with a laugh.

That’s written in the score?

The times, they certainly do seem to be changing. The days of four old guys in black tails sitting upright and rigid in four chairs on a shiny stage playing Schubert or Brahms — well, there’s still that. The Julliard String Quartet, the Emerson, those groups are passionately followed on the chamber circuit. But there’s also a new batch of chamber-sized groups capturing attention, with Eighth Blackbird, a Chicago-based group of six Oberlin College music grads, heading the list. The group previously played the Chamber Society series here in 2004, and is probably the No. 1 new group in the genre today.

“Eighth Blackbird is so hot right now, we felt we needed to bring them back as soon as we could,” Tidwell says. “Everybody in the business knows about Eighth Blackbird and what they’re doing.”

Tidwell says Eighth Blackbird, and other modern sextets, have roots in a 1912 sextet called “Pierrot Lunaire,” by composer Arnold Schoenberg. Some say the piece evokes an image of the smoky German cabaret scene of Schoenberg’s time.

But the Blackbird’s sounds of today can come from any scene — including the junkyard, where percussionist Matthew Duvall found clanky-pitched automobile brake drums. Or a toy store, where the group located whirly tubes and toy pianos. And don’t forget the mighty Thunder Tube.

Pianist Lisa Kaplan says she not only plays the keyboard of her instrument, she plays inside the piano, too. To get a jingly-jangly metallic sound, for example, she inserts screws between the piano strings.

“We’re trying to make an audience not fear this kind of music,” Kaplan explained in an interview with Bloomberg News. “Because I think there is a huge fear that people don’t go to contemporary music concerts because they think it will all be squeak and fart music, and they’ll hate it.”

Kaplan says Eighth Blackbird’s music is classical — except that instead of being written 200 years ago, it is being written today. The group’s personal touch includes theatricality. “I think we’re just trying to put the music out there in a way people can enjoy it,” she says.

The Adés piece, written in 1991, is the oldest work on the program. Some have fun titles, such as Missy Mazzoli’s “Still Life with Avalanche,” penned just last year. The concert’s title piece is Stephen Hartke’s “Meanwhile,” written for Eighth Blackbird in 2007.