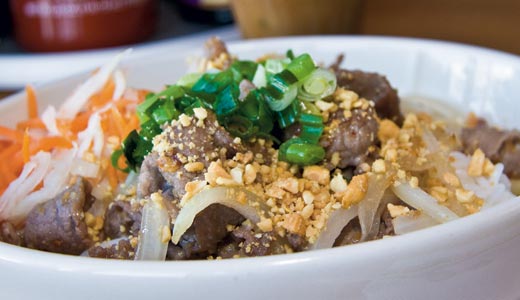 More than 30 years after the first wave of Vietnamese immigrants came to Louisville, these refugees and their children and grandchildren have moved into the mainstream of community life.

Much like our Latino, Bosnian, Senegalese and other immigrant neighbors, these refugees of war brought Louisville a gift that delights both our hearts and our tummies. Our Vietnamese community has made a significant contribution to the cityscape in the form of inviting Vietnamese restaurants and groceries.

Just about every resident foodie knows and loves Vietnam Kitchen. In the same South End neighborhood, Café Annie and Pho Binh Minh all have their partisans. But it takes a few more left and right turns past the South End cluster and into less familiar territory to bring you to Café Thuy Van, a culinary delight that’s been around for nine years but is just far enough off the beaten path to have escaped many foodies’ notice.

Surely it is only geographical distance that keeps this Southeast Asian jewel hidden from peripatetic food lovers. Head out Southside Drive, turn left on National Turnpike, and in just a few blocks, you’ll find this welcoming storefront in a short strip mall, flanked by a Bosnian café and a Vietnamese karaoke bar.

Café Thuy Van’s clientele is largely Vietnamese, and the workers are friendly, hospitable and manage to communicate in heavily accented English. The four-page menu, a bit shorter than Vietnam Kitchen’s but still delightfully diverse, offers English descriptions of the Vietnamese dishes.

Up front, a flat-screen offers American cable. At the back, a larger, theater-style television features Vietnamese programming. Sit in the middle of the room where you can hear the sound on both sets for a mind-bending ethnic experience. Atop one large speaker there’s a Buddha statue decorated with offerings of grapefruit and pineapple. The TV console bears a similar devotional with a Buddha and golden spheres.

The menu’s 32 items include appetizers, rice plates, vermicelli bowls, pho (Vietnamese noodle soups in meal-size bowls), rice noodle soups and egg noodle soups, virtually all well under $10. Specials and family dinners are more. One, goat hot pot with egg noodles and vegetables, goes for $40 small, $60 medium and $80 large. That must be one hell of a goat … I wish I had the language skills to find out.

I assumed Banh Mi beef ($6.99) was loaded on a baguette, as bahn mi in my experience is the Vietnamese version of a Cuban sandwich. Oops. It proved to be a big bowl of Asian-accented beef stew, loaded with chunks of tender beef, the biggest chunk of carrot I’ve ever seen, onions and lemongrass in a rich, salty beef stock. The crusty, snow-white Saigon-style baguette (a legacy of French colonization) came on the side. A sandwich? No, but it was a splendid, warming lunch on a chilly day. It came with Vietnamese soup condiments, crisp bean sprouts and aromatic leafy greens.

A delightful lunch for two came to a very affordable $19.59, plus a $5 tip. Be sure to bring cash, as no credit cards are accepted.