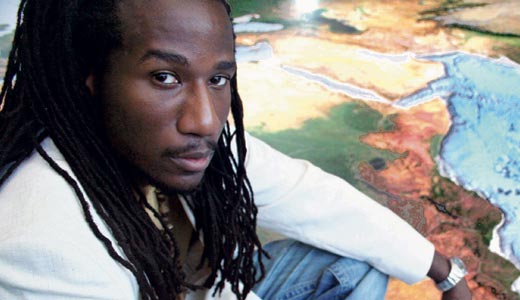 photo by b fresh

Toki Wright lives a life closely linked to hip-hop. Given a mic and a beat, he’s a fierce, enthusiastic showman comfortable with offering a gloomy take on social strata (“State of Emergency”), expounding on community (“Kyendi Kyendi”) and boasting about his own abilities (“Next Big Thing”). Away from the stage, he’s a diplomat of hip-hop, celebrating the form in local community service events and performances in far-away countries like Uganda and Rwanda.

Now, as a leading force behind the recent debut of America’s first hip-hop diploma program at McNally Smith College of Music in St. Paul, Minn., his punditry is rising to an academic level. With all of this vitality and time spent, Wright’s taught himself to adjust to a range of responsibilities.

Brought up in a Buddhist household in Minneapolis, Wright was exposed to black musicians like The Gap Band, Michael Jackson and Prince early on, but he gravitated toward hip-hop because of the presence an emcee’s words could command. While he lived in a city with a burgeoning roster of hip-hop players (Wright specifically notes that gangsta rap acts thrived at the time), he didn’t absorb the culture until after his formative years. “I didn’t even know that scene existed until the mid to late ’90s,” he says, “so my musical influences come from seeing any popular group that would come to town, drum lines and talent shows — things like that.”

Once he got his start, he dedicated himself to his craft. He’s spent the last six years hitting the road, with three years alongside Brother Ali, one of the most prominent hip-hop voices to break out of the Twin Cities. Ali has been instrumental in netting Wright a lot of performing experience early, and come Friday, the pair will once again share as part of the 50-date Fresh Air Tour. “We grew up a few blocks from each other,” says Wright of Ali. “A lot of camaraderie comes with naming the blocks you lived on and being able to recognize landmarks.”

As a frequent opener for Ali, Wright is well acquainted with the arduous task of warming up a crowd unfamiliar with him. Nowadays, he’s not intimidated by the prospect, as the June release of A Different Mirror, his inaugural full-length, means that listeners are more likely to have caught his name or music somewhere. Yet, album or not, he says he’s always thrown into his concerts.

“As an entertainer, you need to be exciting. I’m really passionate about what I’m saying and doing, and I put every bit of that energy into how I convey my message,” he says.

His other positions — he is also a community worker aiding teenagers — play a part in shaping that message. “Your role in the community is something you have to take seriously. People watch you and look up to you. My role has been (one) of an honest person. I always preached that no one’s ever perfect. You always have reason to be better.”

Keeping that in mind, he attests that any words he delivers are never as “harsh” as the content found in mainstream rap. “Even if I use vulgarity, it’s nowhere near what they’re singing along to every day,” he says.

Though he’s otherwise a hip-hop Renaissance man whose activities can’t ably be confined to a single role, Wright’s work often receives the uncertain tag of “underground hip-hop.” He doesn’t bristle at the association.

“I’m not mad at it. It has a certain connotation. People think you have to wear a backpack or something,” he adds with a laugh. “But hell, a lot of people wear backpacks.”

What one calls his music isn’t as relevant to him as the community taking it in. “I don’t care (as long as) people are there to experience it.”