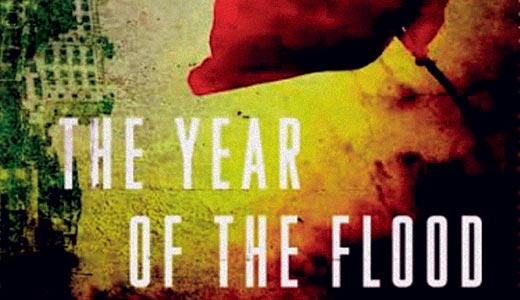 The Year of The Flood

The foundation for this novel, “Oryx and Crake,” was released in 2003. The post-apocalyptic scenario and themes in that novel were no surprise then; they were something Margaret Atwood had used as a device in her earlier novel “The Handmaid’s Tale.” Then came “Oryx and Crake,” whose scope was so large that it dwarfed the work and made it look too focused, when Atwood’s talents are better suited creating whole worlds.

Her new work, “The Year of the Flood,” uses the same world as “O&C” to present a new cast of characters: God’s Gardeners. They are a scientific and religious organization that, while operating as what the government may term a “terrorist group,” hearkens back to the early underground Christians during the Roman Empire, when they had to use secret symbols to identify themselves to each other because their ideas were subversive and challenging. Atwood does a good job of presenting what exactly it is that remains subversive about God’s Gardeners (who resemble trash-picking crust-punks more than anything else, living off the excess so as to create none) in a future world where every good is manufactured by mysterious means and corporate ownership/separation of person from product is at an all-time high.

The problem is that this book uses the same structure (albeit slightly modified), the same world and the same ideas to explore the same storyline in “O&C,” without characters as strong as Jimmy, Glenn or Oryx. The narrative weaves in and out of the first book like a needle and thread, giving the informed reader some nice “oh!” moments when we recognize a scene, but overall, it takes no real lead of its own.

This caused me to spend most of the book asking myself: “What exactly is it that a sequel should do?” I could not figure out what this book does that “O&C” had not already done. We have the same issues of bio-engineering (Wolvogs and Rakunks), corporate control, viruses and subjugation. The only distinguishing element I could think of between the two books is that “Flood” focuses on spirituality, which was treated as more of an evolutionary curiosity in “O&C.”

A reader who has not read the first will come out of this book hungry for the real information left out, and go on (pleasurably) to read “O&C,” a book that actually supplies all the details barely explained in this one. But a reader who has read “O&C” will go through this one wondering why we are getting an unclear and incomplete account of the same information that was covered with more zest and enthusiasm in the first book.