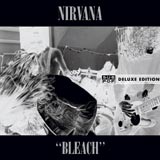 Oh my. It’s been 20 years since Nirvana’s sloppy, dirty, grunge debut album, Bleach, caught the attention of enough people to set the band up to change everything with the album everyone knows, Nevermind. This deluxe reissue by Sup Pop doesn’t exactly unearth a hidden gem, but it does recall the weird energy and proto-grunge pop-metal that would set the world on fire in the early 1990s. The package includes a digitally remastered Bleach and live set from a Feb. 9, 1990, show in Portland, Ore., as well as a 50-page booklet with rare photographs of the young Kurt Cobain, Krist Novoselic and Chad Channing (remember, all this happened before Dave Grohl came ’round). Notables from the live set include early versions of “Sappy,” “Dive,” “Been a Son” and “Spank Thru,” all of which would emerge later in more refined variations. All told, this disc — or double-vinyl — is worth it even for the casual fan, to take a look back at when Cobain was clever and funny, not the depressed voice of a generation.