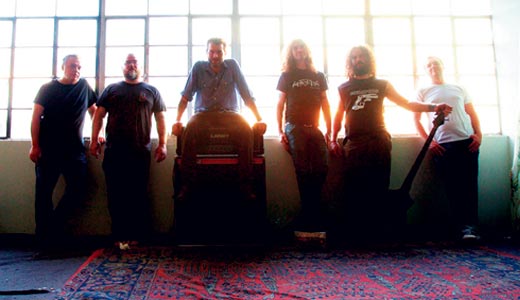 Brawling bastards Lucero have a new one, 1372 Overton Park, and it’s a horn-fueled festival. The band return to Headliners (1386 Lexington Road, 584-8088) Saturday, Nov. 21, as part of their all Memphis tour, featuring Cedric Burnside, Lightnin’ Malcolm and Dirty Sheets. Cover is $15.

I very much appreciate the shout to get me more work! As the go-to guy for hip-hop freelance work at LEO, I make a sincere effort to cover as much of Louisville’s scene as time and space will allow. LEO’s coverage of hip-hop in years past has indeed been light, but has exponentially increased in the last couple years (with of course, room to grow). You’re right, though, that in many cases the artists and promoters simply do not promote. We cannot act upon a notice given 48 hours before the event, or an e-mail sent with next to no information about an event. This goes well beyond the hip-hop scene, but LEO has recently brought back the hallowed Plugged In section after much demand, only for the city’s bands, bars and bookers to fall into old habits of incomplete, inaccurate or untimely information for events to be listed. Bands: Use this tool! It’s the best free advertising in the city — it’s your name in lights (OK, black and white) in the hands of tens of thousands of people weekly.

Let this serve as a Bat signal to any and every serious hip-hop (or otherwise) act in the city. We want to talk about you, learn about the diversity of sounds in the city, and show the world how talented we are. The world knows about Kentuckiana’s abilities as singer/songwriters, noise-rockers and punks, but outside of Nappy Roots has never seen the greatness of our emcees. Just from my own ventures in town, I have met some extremely talented emcees who have the potential to break well beyond our borders but aren’t willing, ready or motivated enough to do the work.

Remember, at the local level, you are your own biggest fan and advocate. You are your own manager. Music fans in this (or any) city can’t find you unless you put yourself out there. We can’t promise that the reviews and coverage will always be positive (unless you’re a believer in the adage, “There’s no such thing as bad press”), but at least help us help you stick your chin out.

The Ladybirds have recently signed to Departure Records, and we have them in our offices to talk about their upcoming album, as well as spin tracks from Whiskey & Wine. Listen at Bluegrass Catastrophe, bluecat.leoweekly.com.