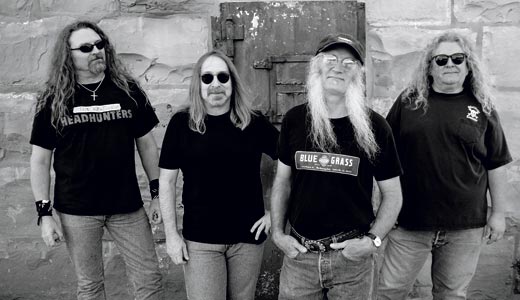 In the early ’60s, Glasgow band Us Incorporated started playing annual benefit shows to support Toys for Tots in South-Central Kentucky. These concerts quickly became a tradition in the area, held every year the weekend after Thanksgiving until the early ’70s, when the benefit shows died out. In 2007, however, Black Stone Cherry decided to revive the long-forgotten tradition and invited their mentors, The Kentucky Headhunters, to join them for the cause.

This weekend, for the third straight year, both bands take part in the rekindled Toys for Tots Benefit shows.

“Kids are very important to The Headhunters, and we love getting to see the children have a great Christmas,” Headhunters guitarist Greg Martin says by phone from Scottsburg, Ind., where he played a Kids First Benefit.

In 1989, The Kentucky Headhunters released their defining album, Pickin’ on Nashville. That record brought the band a slew of awards, including a Grammy and countless CMAs. To commemorate its 20th anniversary, the band just released Live/Agora Ballroom, a 1990 show culled from the original Pickin’ on Nashville tour. “It was all such a blur back around that time,” Martin recalls. The album “was really starting to pick up momentum; but I remember us walking into the Agora for the first time, and we were very much in awe of it, because we’d been hearing about it all our lives.”

Of their junior partners Black Stone Cherry, which features the son/nephew of Headhunters Richard and Fred Young, Martin says, “I’ve watched those guys grow up on the bus, and they’re great. But they have too much energy — they need to give us some of it.”