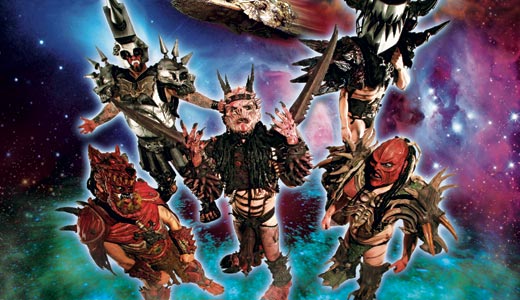 Save yourself: GWAR’s coming to town.photo furnished

GWAR have their ulterior motives, one of which is the no-holds-barred satire of their stage show. It is bawdy, obscene and in-your-face, not elevated humor trying to emulate Swift. They perform Wednesday with Job For A Cowboy, The Red Chord, Stonecutters, The Revenants, Antikythera and The Burial at Expo Five (2900 S. Seventh St., 637-5218, www.expofive.com). Tickets are $20. Oderus Urungus, lead singer and founding member, speaks.

LEO: How did you get a spot on Fox News’s “Red Eye,” and what does that say about the network?

Oderus Urungus: I have no idea how the fuck I ended up on Fox News, all I know is that it’s happened repeatedly now and … (trails off, talks to people around him). Sorry, whoa, I’m back, a group of killer penguins just attacked the lounge. Anyway, I have no idea how I got that gig. I was at Fangoria, in New York City, and they called me up and said, “Hey Oderus, you want to do this show? You in New York?” And I was like, “Yeah, I’m in New York right now, goddamn it!” So I walked straight over to Rockefeller Center, met Bill O’Reilly, went into Fox News and knocked the ball out of the fucking park! And now, eight episodes later, I’m their interplanetary correspondent. Now what does that say about Fox? Well, this is the company that gave us “The Simpsons,” so I don’t really think it’s that far fetched. Just because Fox is a conservative news channel doesn’t mean they have to stay that way. They probably did that mostly because Bush was in office for eight years. Now that we’ve got Obama, I think that them getting Oderus as one of their commentators is their first step to a more liberal platform.

LEO: Have you been worried about the swine flu on tour?

OU: No. Well really, we’re worried that not enough people are going to get it. We are distributing swine flu at every show, as well as AIDS and bubonic plague. So no, we’re not worried about it. In fact, we are quite excited.

LEO: So would that be GWAR’s own kind of health care plan?

OU: Yes. The sick get sick, and then they die, leaving more room for the strong. This is GWAR health care.

LEO: This is going to be in a magazine called Leo. What do you think LEO stands for?

Burn To Shine (myspace.com/burntoshinemusic) release their new album, Signs of What’s To Come, Nov. 14 at Phoenix Hill Tavern (644 Baxter Ave., 589-4957, www.phoenixhill.com), and we talk with the band about their experience recording with producer Toby Wright (Cheap Trick, Primus). Listen at Bluegrass Catastrophe, bluecat.leoweekly.com.