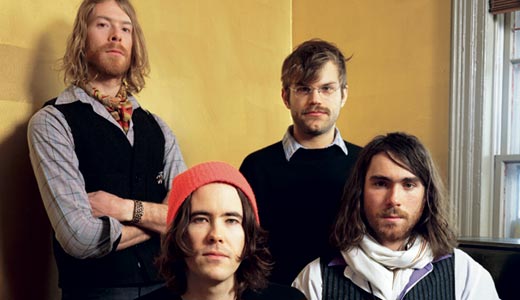 Elvis Perkins is no psycho, but his father, Anthony, played one in a movie. His group, Elvis Perkins in Dearland, perform from their new EP Doomsday with A.A. Bondy and The Woes at Zanzabar (2100 S. Preston St., 635-ZBAR) on Wednesday, Nov. 18. Showtime is 8 p.m., cover is $12. The king speaks:

LEO: You make Doomsday sound like a party rather than the end of the world.
Elvis Perkins: A little bit of both on that one.

LEO: What went into selecting the songs for this?
EP: There was some thought involved, but it’s best to limit the thinking so as not to get the better of one’s (creativity). “Stay Zombie Stay” we revamped from its very slow, mellow acoustic moment, and we more or less finished “Stop Drop Rock ’N’ Roll” to be on this thing. They all seem to weirdly want to be in a group together, those songs.

LEO: How did you discover Sacred Harp music?
EP: I heard some of it through the Harry Smith anthology. I didn’t really know what it was; I was half-drawn and half-mystified. At the time, I didn’t feel like I should know what it was. Our drummer has gone pretty deep into it. He goes to singings all the time.

LEO: New record on the horizon?
EP: That’s a great mystery among the other great mysteries we contend with daily.

LEO: Does your father’s history in the performing arts influence the way you perform?
EP: Not so much in my conscious mind. Actually I’ve got some kind of genetic or metaphysic information. I was performing somewhat when he was still walking the earth, but I didn’t really conceive of myself as a performer as I have as of this point. Once you’re on the road for a while, you’re like, “OK, I’m a song-and-dance man; let’s be truthful with it.” I would love to have had more perspective. He did tons of theater and stage work, and I think he was probably pretty good at it. I don’t really feel like I know what I’m doing.

LEO: What are you listening to right now?
EP: There’s a dishwasher going. I’ve recently been on a vinyl binge. I go in for whatever. They say you can’t judge a book by its cover, but you can pretty much judge a record by its cover. All sorts of wonderful weird things that I find — I have a record of French people speaking, some remote dialect of Lyonnaise, which is riveting in its own way. The most mind-blowing thing is the National Bulgarian Folk Ensemble. They’re doing this incredible vocal choral work. I don’t know what they’re saying, but it must be something deep and cosmic.

Music ’Cast
We rap with the duo behind Scanners, a new partnership featuring Nacirema (pictured) and Dr. Gonzo, who have just put out a self-titled CD. Listen at Bluegrass Catastrophe, bluecat.leoweekly.com.