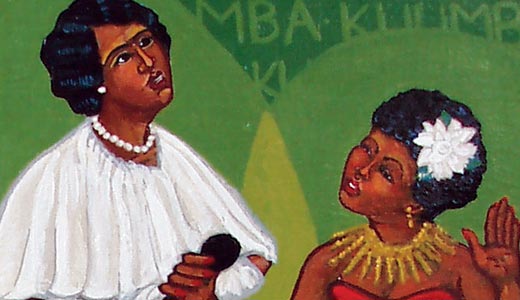 I confess: I drove past Glynis McManamon’s studio three times before I finally found it. Tucked into a strip of shops on Bardstown Road between Roanoke and Richmond, it is as inconspicuous as a book on a library shelf.

On an early autumn evening, I came to the Shepherding Images studio because I had been told there is a nun inside who passes the hours of her day creating religious icons and images. And although that claim initially sounded as farfetched and fantastical as the existence of teenage vampires, I figured anything is possible on Bardstown Road.

To see McManamon’s paintings, you must first call. On her business card and website, the hours of her studio are listed as “according to the spirit, or by appointment,” which pretty much sums up the dual spiritual and practical nature of what she does (she is, after all, a nun with a business degree). When I called, she assured me that it’s no bother at all, she lives so close by that opening the gallery is hardly a hassle, and so we set a time.

Meeting her in person, it became clear to me that the studio’s modest façade is not a logistical oversight but an expression of the humility and self-effacing tenets by which McManamon lives her life as a woman religious. She greeted me energetically and comfortably dressed, poised to show me around. It didn’t take long for my visit — I pretty much stood exactly where I came in. The gallery is compact enough that it’s possible to observe everything in it from a single vantage point — the chirping bird and kitchen table, the notebook-sized paintings on the three surrounding walls. The only part of the space secluded from initial inspection is the public prayer space in the back of her “practical chapel,” in which she prays for and with anyone seeking guidance and inspiration.

Her most recent series of paintings, “Shining Like Stars: Women of Courage, Women of Grace,” is a three-part exploration of heroines from the Christian, Jewish and African-American traditions. As an apostolic member of the Sisters of the Good Shepherd Catholic order, she uses art as her ministry to inspire others to acts of courage and spiritual distinction. Both receiving the tradition and transforming it, McManamon’s paintings seek to imbue the subject and the audience with a fresh breath of the Holy Spirit.

In addition to the dualism of practicality and spirituality she manifests in the design of her physical surroundings, McManamon fuses both tradition and innovation in the execution of her artwork. Her respect for tradition is expressed not only in the selection of her subjects, but also in the techniques she uses to depict them. She explained that the icons in this show, from the Christian tradition, are painted on egg tempra boards she orders from a Russian company, accented in 23-karat gold and silver leaf. That respect for tradition is balanced by her delightful predilection for innovation, evidenced by the addition of heroines that correspond to the holiday of Kwanzaa, in addition to those of Chanukah and Christmas. While her Christian and Jewish heroines are carefully executed and undeniably beautiful, the playful and expressive narrative compositions in her Kwanzaa series demonstrate the best of what this painter has to offer.

It’s no wonder this series, which features such notable women as Rosa Parks, Clara McBride and Madame C.J. Walker, was purchased in its entirety by a private donor for display at Maryhurst, a local social welfare agency. Maryhurst, started by the Sisters of the Good Shepard in 1843, offers a wide range of assistance programs for young women. By attaching each of the African-American women to the virtues that Kwanzaa celebrates, McManamon illustrates the tangible legacy a life dedicated to spiritual actions can leave. At Maryhurst, these vignettes will likely serve the function that stained glass windows would in a church — inspiring and educating future women to lead lives of dedication and service, as McManamon has and will continue to do.