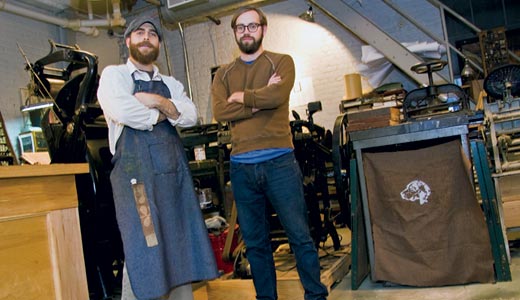 Time travel, as far as I know, is not yet a reality. So if you’re interested in a time gone by, you have to rely on photographs, films or books for your historical fix. Another option is to go to where history is still alive, where the old is new again or has never left.

Except for the computer on a table, the 21st century barely touches Hound Dog Press, a custom letterpress print shop in the Mellwood Arts & Entertainment Center. To enter into the shop of artists/co-owners Nick Baute and Robert Ronk is to step back into the 19th century.

They even look the part, with their jaunty caps and full beards.

Hound Dog Press specializes in one-of-a-kind invitations, business cards and posters, as well as lithographs and linoleum cuts. All are printed on cotton paper using soy-based ink, a nod to the 21st-century “green” movement. The ink, paper and equipment give the shop a pleasant, if not easily identifiable, scent. Baute and Ronk opened the business in November of last year and spend their days working on 1892 Golding Pearl, 1909 Chandler & Price Oldstyle and 1916 Golding Jobber presses.

This is pre-modern design that has been used for centuries by fine artists and commercial printers alike. Nothing looks quite like letterpress, with its indentions on thick paper. The ink is applied to individual engraved wood blocks, then pressed onto paper. Its lineage can be traced back to the 15th century — to printer Johannes Gutenberg’s inventions of moveable type and the mechanical printing press. Things didn’t change until the invention of offset printing in the mid-20th century.

Using old letterpress equipment does have its challenges. “You have to slow down, you can’t rush anything here,” explains Baute. Ronk agrees, stating, “It sort of makes itself that way. You have to love the process. I feel so satisfied after spending two or three days (on a project). When finally (finishing) that last run, it feels good.”

Baute and Ronk met at the University of Kentucky, where they both graduated with a bachelor’s degree in printmaking. The first incarnation of Hound Dog Press was in 2004, when Baute started doing freelance work under the name. “I do have a hound dog,” he says, smiling. “I thought (Hound Dog Press) was a good country name. Now I live in the country, in Westport.”

To give back to his new home, Baute recently created a five-color, two-block reduction linoleum-cut print for the Friends of Westport to help raise funds for the renovation of a local schoolhouse.

After college, Baute worked for Bowne & Co. Stationers in New York City, another 19th-century letterpress shop that is also a museum. They have a similar vision for Hound Dog Press. “We would like to become a destination,” Baute says. “Every big town has a letterpress shop, like Hatch Show Print in Nashville — that’s over 100 years old.”

In addition to opening up the shop to schools, groups and tourists, they also take their act on the road. In February, they demonstrated at 21c Museum Hotel how to make letterpress coasters with a tabletop press. They have plans be at 21c again in December.

Hound Dog Press also has a rack of ready-made items, including Christmas cards. That’s something quite useful this time of year.