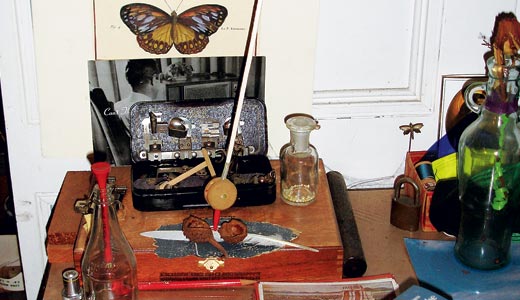 Nine years have passed since the muse first struck Gregory Chaney, 52, a former clinical psychologist. He transformed into an artist with the creation of his multimedia installation “The Revolutionary Theatre of the Divine Imagination,” also referred to as “Parnassus.”

“I define myself as an artist, yet you will find no formal education or training in art on the résumé,” he says. “I can best describe the process I have been involved in … as receiving a ‘call’ to make art and responding with my whole being, assuming an attitude of surrender to divine will.”

And surrender he did — the “Theatre” soon threatened to overtake his living space. The eight stations in the octagonal room, including found objects such as globes, netting and wire, are best viewed in minimal light to achieve a sense of sacred cohesiveness. There are references to the myth of the minotaur and shrines to Mexican artist Frida Kahlo.

What does it all mean? Clearly the work is much more than the sum of its parts.

“I wish I could intelligently explain it all, but I can’t,” says sculptor Ed Hamilton, a good friend of Chaney’s. “But what I do know from seeing and experiencing and having Greg walk me through this personal journal, I can say without doubt that this work, this triumph of the soul, is indeed a labor of love. Why do we create? One wonders at the mystery of it all. Like all creative people and artists, once you get the call to create something, you no longer are in control. From brain to hand, the muses are in charge.”

Chaney’s explanation? “Un-selfish love,” he says. “That’s what the room is all about, in a nutshell. To give a thorough exposition … the various areas of the work, their relationships to each other, themes and stories expressed therein, the creative process involved, would take at least two weeks. In the past three and a half years, a great deal of my time and energy has been devoted to research and reading in the service of better understanding the meaning of the artwork.”

Chaney exists in a world occupied by such visionaries as William Blake, Joseph Campbell and Thomas Merton. To him, “true art comes from an unconscious place.”

He believes the “Theatre” is complete yet is somewhat uncertain, as he never knows when the inspiration will strike again. He has no compulsion to make more art.

Chaney wants “Theatre” to be experienced by others. He recently deeded the work to stewards who reside in Louisville and elsewhere, including his close friend Virgil Boyd Jr. The caretakers’ job is to find a permanent location for the installation and promote it.

That may or may not happen. The sculpture is about to be evicted from its current location due to money owed, a problem that will not be completely solved by the time LEO Weekly goes to press. Chaney hopes to hold off the creditors with a partial payment and raise the rest later, essentially buying some time for the caretakers.

Chaney says many people have been kind to him and “The Revolutionary Theatre of the Divine Imagination” over the years. Now he’s waiting for the next phase. Stay tuned.