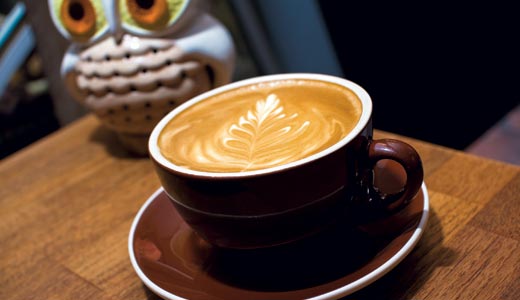 It was a late October afternoon, and I was looking out the steamy window of Day’s Coffee when a leaf swirled down from a gun-metal sky. As I watched, the sun sent a ray, and the sullen, monotone leaf morphed into a vivid gold.

It was a surreal instant, enhanced in meaning by the warm mug in my hand and by the ancient-tinged aroma of a special coffee that often transports me into the autumn reverie I need. Just looking into the swirling brew is hypnotizing, and as the first taste sends warmth down into my chest, I always know it is time to stop and think.

Reverie — scientific, artistic and spiritual — has been fortified for centuries by the mind-transforming elixir coffee, going back to a legendary moment in East Africa when a goat herder decided to sample a bean that made his goats loopy and sleepless.

In the Pacific Northwest, where laidback coffeehouses from Portland to Vancouver are a way of life, my favorite espresso-enhanced variation is called a “Shot in the Dark.” In the Northeast, where the harried turn their traffic jam-engulfed Toyotas into high-tech work cubicles from Washington, D.C., to Boston, it’s called a “Red Eye.” Elsewhere, including Chicago, it’s called “Kamikaze.”

In eclectic and sometimes eccentric Louisville, this transcendental potion is called all three. At Java Brewing Company on Frankfort Avenue in Crescent Hill, ask for a Kamikaze. Along Bardstown Road in the Highlands, tell the baristas at Day’s and Heine Brothers you’d like a Shot in the Dark. At the recently opened Quills on Baxter Avenue, ask for a Red Eye.

The recipe is the same no matter what it’s called. Add one shot of espresso infused into a cup of regular drip coffee, dark roast to be safe from caffeine overload. If you want an extra boost, add a second espresso shot, ask for “Black Eye in light roast.”

The result is a complex, mysteriously rich concoction that delivers a savory depth I never found with the drink’s more expensive, milky half brother, the latte. While the latte, which is steamed milk with a shot of espresso, gives artists like Chris Heiniger at Quills a chance to entertain with his phoenixes and other latte-froth designs, it fails to deliver the impact on the senses of the Shot in the Dark.

The Shot in the Dark creates the impregnable trance I remember from late-night study sessions in college, hunched over a desk reading Faulkner’s “Light in August” for the first time. More than 20 years later, in a hectic, frenetic, no-boundaries world, I realize the only thing I can control is what happens in my mind, and a Shot in the Dark helps me wall out all else.

Sometimes, it’s by the cozy fireplace at Java on a January evening, with Jupiter and a crescent moon looking in through the vine-draped windows. On a recent Saturday morning at Day’s, I laid down the newspaper, packed away my diary and sat back with a Shot in the Dark to travel in my mind. I rarely plan where I’m going, the way you can’t map out a dream. I looked into the layers of cream, espresso and Kenya dark roast and submerged.

Was it possible, I wondered, that Galileo sipped coffee between glances through his telescope at the four mysterious spherical objects projecting in a line from Jupiter? Was it in a moment of coffee focus that he mind-linked Jupiter’s moons to his heretical epiphany that the Earth must revolve around the sun? Was it possible, I wondered, that da Vinci was in autumn reverie when he opened his notebook and sketched a man wearing wings? Could Shakespeare have been in a coffee trance when he wrote: “There are more things, Horatio, than are dreamt of in your philosophy”?

Those thoughts led me to the book “Uncommon Grounds: The History of Coffee and How it Transformed The World,” by Harvard graduate and investigative reporter Mark Pendergast.

And yes, it is possible that Renaissance thought — scientific, artistic — was fortified with coffee. Coffee’s use as a motivator for thought, meditation and focus goes back at least to the 11th century. By comparison, da Vinci sketched his flying machines in the early 1500s, and a century later, Shakespeare wrote “Hamlet” and Galileo observed Jupiter’s moons.

I best brood about such things when I can push out all the minutia of life, with the Shot in the Dark as my muse.

With a Kamikaze at Java Brewing Company on a subsequent morning, I opened Pendergast’s book to learn about the 9th-century origin of coffee, through the “Legend of the Dancing Goats.” A goat herder in the Kingdom of Kaffa in what is now the hill country of Ethiopia saw his flock behaving with unusual vigor, standing on their back legs and apparently dancing.

The shepherd found they were eating berries from a certain bush; he tried. That night, he felt particularly focused, had clear thoughts and couldn’t sleep. He went back for more “Kaffa beans.”

Kaffa beans and their product, eventually ground and brewed, were discovered by Turk invaders, who called the drink kahve and planted them in Yemen, where they were sold through the port of Mocha. In the 11th century, Crusaders brought them back into Northern Europe, and later the Dutch found the perfect place to grow the shiny-leafed bushes, the island of Java, in Indonesia. The Dutch called the bean koffie. By the late 1500s, Vienna had its first coffee shop, called a “café.” Vienna. Mozart, perhaps?

Coffee shops had been spreading in Europe for two centuries before the incomparable Beethoven emerged in Mozart’s trail. Beethoven, Pendergast wrote, required exactly 60 ground beans per cup; did he brew Moonlight Sonata in his oversized brain, I wondered, with a half-empty coffee cup by his powerful hands?

It was a lot to think about, and as last winter set in, I went to Java one afternoon to sit by the fire with a Kamikaze. With the mug in my hand, and the flickering fire acting as my mesmerizing midwife, I allowed my mind to slide into visions of what might have been. I conjured images of Herman Melville sitting at night in a cottage on the Massachusetts Atlantic shore, watching the moonlit waves crashing into black, jagged rocks.

I imagined Melville sitting in a frigid room with cracked walls that let the sea breezes in, blowing his candle flame horizontal. I imagined the young Melville, a former whaler, sipping his coffee and remembering a story he had heard about a huge whale ramming the whale ship Essex. Melville, I imagined, looked through the steam of his window, rubbed his hands to make them warm, and wrote: “Call me Ishmael.”

I ordered a second cup, and in my mind I saw Jack London, in the Yukon, a young news reporter out of San Francisco in about 1903, the year that Italian businessman Luigi Bezzera first invented the espresso machine.

I could see London stepping out of an inn, seeing the steam spewing from the mouth of a wolf-like dog, and a man squatted in the snow nearby trying to build a fire. “C’mon in,” London said, in my imagination.

“Be there soon,” said the grizzled gold panner of my creation. “Gotta get a fire going for old Buck here.”

And now autumn is upon us again. Today in Louisville, artistic thought, scientific innovation, focus for that medical school exam and a plethora of released creative impulses are fueled by the concentration of the Shot in the Dark.

“A lot of people are getting Shot in the Dark now,’’ said veteran Heine Brothers barista Karla Ortega, at 6:35 a.m. on a recent Friday morning. “I just had one.”

At Heine at Douglass Loop, barista Jennifer Roberts rises to her toes to exert the proper force of all of her 100 pounds to compress the espresso grounds at exactly 30 pounds per square inch of pressure. The point is to compress the finely ground espresso blend so the granules get maximum exposure to the superheated water about to be fired through for 28 to 30 seconds.

The petite but effervescent Roberts talks about the procedure like a NASA engineer preparing the fuel mix to launch the next space mission. She should: For coffee drinkers, she is leaning on Holy Grounds. In minutes, her faithful customers will be in their own worlds, thinking thoughts that, who knows, might change the world, or at least induce moments of transcending serenity and an inward journey into their own minds.