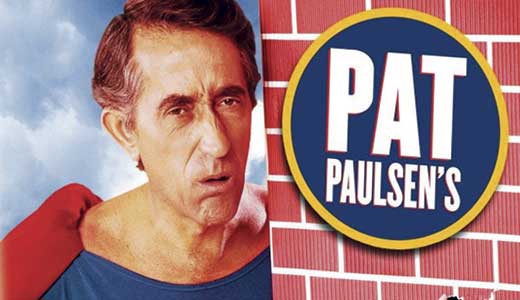 PAT PAULSEN’S HALF A COMEDY HOUR

After three years as a writer and regular on “The Smothers Brothers Comedy Hour” — and a 1968 run for president! — sad-sack comedian Pat Paulsen finally got his own show … and it tanked spectacularly after only five episodes. Yeah, we kinda liked the guy. With great guest stars including Don Rickles, Don “Maxwell Smart” Adams, Joey Heatherton, Wilt Chamberlain, Bob “(Pre-)Super Dave Osborne” Einstein and even Mel Blanc as Daffy Duck.

While we personally believe The Band/Scorsese’s “The Last Waltz” to be the greatest concert movie ever made, this is a very close second. Now available on Blu-Ray: Jonathan “Silence of the Lambs” Demme’s 1983 Talking Heads tour, with frontman David Byrne at the peak of his formidable charisma, bending like a yoga master, oft clad in an enormous suit, mesmerizing and fascinating and surreal. Includes such hits as “Once in a Lifetime,” “Take Me to the River” and a legendary version of “Burning Down the House.”

This rarely seen version of the Dickens classic was originally an episode of the “Chrysler Shower of Stars” dramatic series. But what makes it truly notable is the presence of Fredric March as Scrooge and a remarkable performance by Basil Rathbone as Jacob Marley. Watch for a young Bonnie Franklin as Susan Cratchit.

In director Atom Egoyan’s latest, a young man tries to come to grips with the fact that his father may have been a terrorist. With Arsinee Khanjian and Scott Speedman.

Isn’t it amazing that Louisville — a name synonymous with baseball and home to some of the greats of the game — doesn’t have a historic old baseball stadium? This vid takes a loving look at such hallowed halls as Wrigley Field, Comiskey Park, Tiger Stadium and Fenway Park, along with the greats who played there.

ANGELS VS. DEMONS: FACT OR FICTION

DRAG ME TO HELL

Sam “Spider-Man” Raimi — a name once synonymous with horror — returns to his roots in this oral-fixated tale of a basically good person (Alison Lohman) who reaches for the professional brass ring, only to cause harm to an old woman who curses her to an eternity in hell. Justin Long stands around and reacts to some of special-FX guru Phil Tippett’s best work. As only Raimi can do it.

A limited number of these 19-disc/72-episode/four-film complete sets were printed for sale at this year’s Comic Con, and a few are still available as of this writing. If you need to know more than that, you can bite our shiny metal asses.

Referred to by many as a Limey “Texas Chain Saw Massacre,” this cannibal chow-down is rife with tongue-in-cheek British black humor. A group of friends wind up at a country manor house, being served a meal of gourmet meat pies. You can guess the rest. Recommended.

HAPPY BIRTHDAY TO ME

Re-release of a guilty fave from the slasher decade. We always liked it because it stars squeaky-clean Melissa Sue Anderson from the “Little House on the Prairie” TV show — and she’s terrible in it! Gangs of fun.

HORROR IN THE WIND

Friggin’ hilarious queer tale that defies categorization. The USofA, lead by its holy-roller prez, releases a hormone suppressant upon the world to “win the War On Sex.” Unexpectedly, it mutates, turning gays straight and vice-versa. Not to be missed.

One of Peter Jackson’s little-known titles — now available for the first time in America! A millennium ago, a monk dies — and is cursed — trying out a pair of experimental wings. In the present day, his spirit encourages a young inventor to succeed where he failed, but the inventor’s greedy ex-boss has other plans.

LAND OF THE LOST

Will Ferrell mugs at the camera for 101 excruciating minutes, slinging crap ape-like at a cherished childhood memory. Since all three seasons of the original series are available on DVD for about $25 each, we can’t imagine why you wouldn’t ask for them instead.

LOVECRAFT: FEAR OF THE UNKNOWN

A wonderful doc on H.P. Lovecraft: a frail, literate, Old World gentleman of good breeding from the 19th century — and father of modern horror fiction. Fantasy filmmakers such as John Carpenter, Neil Gaiman and Guillermo del Toro introduce the viewer to the HPL tales that launched their careers. Highly recommended.

Wow! What an odd and unexpected movie. Nick Cannon, Clea DuVall and Timothy Hutton sign up for a psychological research study — only to find themselves captives in a brutal government program of brainwashing and paranoia. Chloë Sevigny is the sympathetic psychologist whose help leads to disaster. Check it out.

An enigmatic sci-thriller from the co-creator of “Blair Witch.” A CIA Special-Ops force goes to Taliban territory after 9/11 to take out a cache of WMDs. Instead, they stumble upon an otherworldly mystery. Some people really hated this flick, but we thought it was nicely surreal. You decide.

WHERE THE DAY TAKES YOU

This dark teen drama about the perils of growing up in Hollywood wasn’t the best thing we ever saw when it first came out in ’92, but it did have one of the best casts. Check out Sean Astin, Adam Baldwin, Lara Flynn Boyle, Nancy McKeon, Alyssa Milano, Dermot Mulroney, Christian Slater — and the film debut of Will Smith!

LEGEND OF THE SEEKER: THE COMPLETE FIRST SEASON