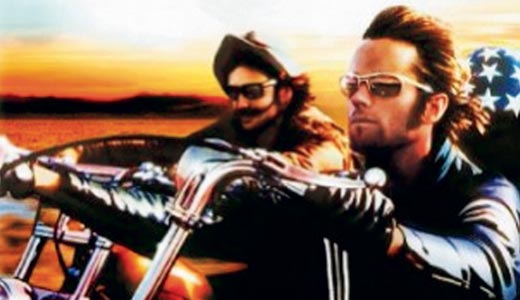 First Blu-Ray release of an American cultural milestone. Dennis “hopped-up” Hopper and Peter Fonda wrote, directed and starred in this unforgettable biker odyssey. Unforgettable to you and me, that is; Dennis and Pete can’t remember 1969 at all. First they smoke some dope. Then a lawyer (Jack Nicholson!) gets killed. Then they drop acid in a graveyard with Karen Black. Then they get shot by rednecks. Then the movie makes a mint. Then they smoke some more dope …

Neat! A live-action version of the cult anime hit — from the producers of “Crouching Tiger, Hidden Dragon” — with Gianna Jun as the mysterious young Japanese-American (resplendent in her school uniform, white cotton panties and Samurai sword) bent on wiping out a nest of scientifically created undead on a U.S. airbase in 1966.

A lavish and sultry French costumer set during the Belle Epoque, with Michelle Pfeiffer as a courtesan (French for “fancy hooker”) who wants to retire. But scheming bitch Kathy Bates throws a roadblock to her happiness, forcing her to teach her disaffected son (Rupert Friend) the ways of love in return for her freedom. The son, however, soon develops desires of his own, falling into a destructive fantasy world, pulling Pfeiffer in with him.

If you’ve never seen this show, the first breakout hit on the fledgling Showtime cable network, prepare to be amazed. Completely out of the blue, Shandling took all the inane trappings and baggage that had sucked the life out of TV sitcoms and turned them around, making the studio — and the studio audience — part of his daily life. The result? A simply brilliant 72 episodes across four seasons — all included here along with many welcome bonus features. Priceless.

While this sounds like a nicely savage indie “Quarantine” or “Outbreak” rip-off — a vet discovers herself in the midst of a contagious epidemic after the government quarantines the town — the cast should give you a clue as to its Hallmark TV roots: stars Tiffani Thiessen, Vince Spano, Faye Dunaway (as the governor!), Eric Roberts, Bruce Boxleitner and French Stewart.

Time Life has recorded every induction ceremony, every performance and every event in the RnRHOF’s 25-year history. Now available: All of it! Yep, 125 amazing performances by the likes of Mick Jagger, Tina Turner, Springsteen, Bono, CSN&Y and Tom Petty, plus historical background by some of the greats in music journalism. This is simply friggin’ awesome.

A pair of docs from the early ’80s that provide insight into today’s global economic woes. Traces the causes and effects of a seven-week strike on a small but successful metalworking factory in Indiana from the point of view of owners, managers, the union and the individual workers.

This big winner at the SXSW Film Festival documents the trials of the professed killers of Sister Dorothy Stang, a 73-year-old nun from Dayton, Ohio, who was murdered for simply being in the Amazon rainforests. Her killers couldn’t understand what the fuss was all about.

TRANSFORMERS: REVENGE OF THE FALLEN

If the first “Transformers” movie was a welcome return of a childhood memory, all spiffed up and sporting sexy new friends, this one arrives with nothing much to do. Or maybe that’s not fair: This is more action-oriented, focusing on the bots instead of an engaging human storyline. Stars Shia LaBeouf and Megan Fox have little to do but run from one titanic metal smack-down to the next. Don’t get us wrong — we liked it, had fun and are looking forward to the next, but it simply didn’t seem as immersive as the first. Still, a must-own.

This bad-movie howler from ’88 is a guilty pleasure of ours, first seen on “Svengoolie’s” resurrected Chicago TV show in 1995. A bunch of attractive young people go to the Caribbean on a gangster’s boat, unaware that a “mutant cat” (a goofy homemade hand-puppet) has escaped from a lab and snuck on board. Priceless.

The title pretty much says it all as Willie and Winston play the Lincoln Center along with Norah Jones, doing some of the late bluesman’s best including “I Love Her So,” “Hit the Road Jack” and “Unchain My Heart.”

THE SMOTHERS BROTHERS COMEDY HOUR: THE BEST OF SEASON 2