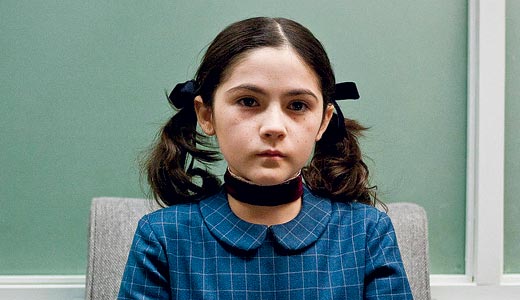 There’s nothing we like better than a good ol’ “bad widdle kid” story. Whether it be the “Midwich Cuckoos,” “The Others” or “Children of the Corn,” this is one genre that never fails to deliver. Case in point: This over-hyped tale of a seemingly innocent 9-year-old orphan (Isabelle Fuhrman) who seems to be a catastrophe magnet … but the truth is far more icky. Gangs of terrifying fun.

THE ACHIEVERS: THE STORY OF LEBOWSKI FANS

An hilarious doc about local-boys-done-good from the producers of “Dogtown & Z-Boys.” As every red-blooded Looavillyun knows, “The Big Lebowski” is Joel and Ethan Cohen’s cult hit about a witless slacker/bowling-junkie (Jeff Bridges) who seems to attract disaster just by breathing — yet he never loses his mellow. But it took a pair of wild-eyed locals, Will Russell and Scott Shuffitt, to realize that this mellow groove was as good a reason to party as any, and so was born (insert horns here) Lebowski Fest! The rest, as they say, is hysterical. A must-own.

SciFi Channel’s latest trip to the well, this time going back to before the Cylons attacked the 12 colonies, showing something of their evolution from robot slaves to cable ATM machines. The story is told from the point of view of a pair of Cylon agents, with Edward James Olmos directing. You BG fans are idiots, you know that?

Shocker rip-off of the infamous true German child-prostitution-and-drug ode “Christiane F. — Wir Kinder vom Bahnhof Zoo.” This French/Italian stinker sticks to the same basic plot, but cranks up the ick factor with tons of nudity, drug injections in sensitive places, projectile vomit and a woman retrieving drugs from another woman’s poop-shoot. For lovers of mondo movies only.

ICE AGE 3: DAWN OF THE DINOSAURS

Yeah, it’s a lot of fun seeing the guys back together again for another round of CGI-animated pre-historic nonsense. And it’s nice that Ray Romano, John Leguizamo, Denis Leary, et.al., returned to provide their familiar voices. Our beef? Why the hell did they have to add dinosaurs? Dinos had been extinct for a million years before the last ice age, and there are FAR more interesting — and equally as extinct — critters to inform and entertain, so why dinos? Could it be that dinos are a sure sale at the toy store, as opposed to, say, the equally interesting but far less promoted glyptodonts? Strictly for the wee-ones.

An immersive six-part IFC miniseries celebrating all things Python. A parade of comedians, rockers, politicos and just plain nut-jobs act out their favorite naughty bits — beside the real Monty Python guys! — as a form of a living bio, explaining the entire history of the troupe with absolutely no/none/nada fabrication or embellishment of any kind. Yeah right. And this first Python assemblage since 1983 features the infamous “Life of Brian” TV, er, “debate” from 1979. Priceless.

NIGHT OF THE CREEPS

First Blu-Ray release of one of the best brain-dead teen horrors of the ’80s: director Fred Dekker’s tale of extraterrestrial mouse-like slugs that jump in people’s mouths when they scream! From there they breed and burst out of their hosts’ heads after turning them into zombies. Seriously demented fun and gangs of great bonus material from the inspiration for 2006’s “Slither.” Enjoy.

A wicked and atmospheric Finnish/Czech horror film about Christianity, paganism and war; aka “Filth.” A pair of brothers commit a horrible act in the waning days of organized brutality, circa 1595. Haunted, they stumble into a village where they find an ancient sauna that is rumored to “wash away sin.” But to seek forgiveness, you must first accept that you have sinned … and accept the consequences. Very cool.

In this demented low-budget spoof of monster movies, a la “Scary Movie,” shot partly on a Canadian golf course, a pizza delivery boy discovers that he is the descendent of legendary vampire hunter “Van Helsing.” A big dumb hoot with Leslie Nielsen and SNL’s Kenan Thompson in cameos.

If you know anything whatsoever about mathematics, you’ll laugh your ass off at this doc that claims to show a profound numerical relationship between the placement of fields and temples in Egypt and those of other far-flung megalithic sites. The great thing about numbers is that they are infinite, meaning that it is easy to “find” a relationship between any two sets of them, even when they don’t exist. Our minds are programmed to see such patterns (like seeing a bunny rabbit in a fluffy cloud); these patterns are called “simulacra.” The vid’s a fun throwback to the days of “In Search of …”

There were bets being placed all over Hollywood: Would this teaming of egomaniacs Woody Allen and Larry David be a major hit, or would it send people screaming from the theaters? Well, co-stars Evan Rachel Wood, Ed Begley Jr. and Michael McKean keep it from going completely off the rails, but David’s screeching Russian misanthrope is pretty hard to take at times. Wood, as a young Southern runaway who moves into his apartment, helps calm him down, but by then, your ears are ringing. Originally written for the late, great Zero Mostel in the David role. Now THAT we’d love to see!

ADULT SWIM: IN A BOX

LIFE AFTER PEOPLE: THE SERIES

THE PRISONER: THE COMPLETE SERIES

UFO HUNTERS: THE COMPLETE SEASON ONE