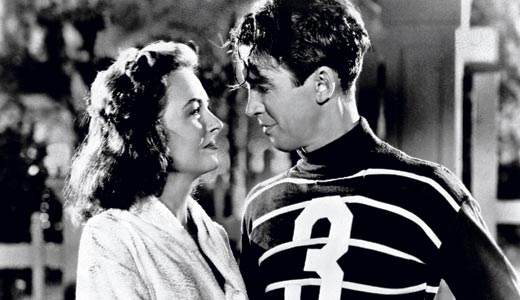 It's A Wonderful Life

Now available in a two-disc collector’s set (with a Christmas ornament!) and in Blu-Ray for a great price: The perennial Christmas chestnut from Frank Capra, starring Jimmy Stewart, Donna Reed and Lionel Barrymore. Nothing more needs said.

ALIENS IN THE ATTIC

An obscure doc about an even more obscure cult phenomenon: Larry Pierce. He’s a Hoosier, a guy who works in a factory and just happens to write the funniest, most toe-tappingly raunchy country music you never heard. No one in their right mind would sign this guy to a record deal — until he found an equally demented indie label who started selling his stuff at truck stops. The rest, as they say, is hysterical. Check it out.

Hilariously angry — and often dressed in women’s clothes — Eddie Izzard is one of the funniest guys on the planet, and this live set captures him in his element. His bit on the universal human hatred of houseflies should be recited daily by school kids along with the Pledge of Allegiance. Terrific.

The best miniseries ever made? It’d get our vote! The late Bob Peck rules as the police detective with a dark past investigating the murder of his own daughter, with Joe Don Baker as a mysterious long-time compatriot. But beyond the amazing performances, brilliant script and icy direction is the music by Eric Clapton, Willie Nelson and Tom Waits. Trust us: This is the standard by which all TV should be judged.

Don’t watch this documentary unless you are ready to plant a garden. Taking a global perspective, it shows how the explosion of 1950s American fast-food joints turned the production of food from “sustenance” to “commodity,” giving limitless control of the world’s food supply to a select few corporations, which (by law!) must put profit over public health, nutrition, worker safety, starvation in undeveloped countries and environmental concerns. You will be angry.

G.I. JOE: THE RISE OF COBRA

A strictly-for-the-bucks ad for new toys and vidgames, melding G.I. Joe with Iron Man to create a super-marketing campaign. That being said, it’s also a fun, if overly complicated bit of cinematic mayhem, meant to be nothing more than Big Dumb Action Fun — complete with blazing hot babes! Yeah, we liked it.

Cuba Gooding Jr. stars in this solid and expensive-looking Phildickian tale of a man who wakes up in a hospital, amnesic with a microchip implanted in his brain. Val Kilmer plays the corporate rep of those responsible. Why Sony dumped this to video is beyond us.

I LOVE YOU, BETH COOPER

Luscious Hayden Panettiere shines in this tweeny comedy about a guy (Paul Rust) who reveals his long-hidden infatuation with her … during his high-school graduation speech! But, rather than the demure little angel he imagines her to be, she reveals that she is one adventurous little vixen who intends to show him the night of his life. We loved it!

A welcome smattering of sitcom Christmas episodes from the ’50s and ’60s, including “Father Knows Best,” “The Donna Reed Show,” “McHales Navy (The Day They Captured Santa Claus),” “Bewitched,” “That Girl,” “The Flying Nun” and more. A great, cheap gift for the ’rents.

20th Anniversary Ultimate Collector’s Edition and first Blu-Ray release of this modern-day holiday tradition. The Griswolds — Chevy Chase, Beverly D’Angelo and kids Juliette Lewis and Johnny Galecki — want nothing more than a nice, quiet family holiday. The problem is, there’s nothing nice or quiet about the relatives who make up their family! You know the rest.

John Huston’s final film is a quiet, unhurried and painfully delicate telling of James Joyce’s ode to Ireland. Co-written by son Tony, and starring daughter Anjelica, this centers on a simple family Christmas dinner, finished off by an evening’s conversation in which the meaning of “family” is explored amid the rich traditions and deep history of the Emerald Isle. Enjoy.

That rarest of cinema: An all-but-unknown movie that marked Marlon Brando’s feature film debut! He plays a paralyzed war vet, learning to live again without legs in a society that considers him “half a man.” Fully restored by the fine folks at AMC.

Good, but unnecessary, remake of the 1974 subway-car hijacking thriller that starred Walter Matthau, Robert Shaw and others. This one stars the always-reliable Denzel Washington with John Travolta as the whacked-out villain. Good, but we like the original.

The one that “Watchmen” junkies have been jonesin’ for! A “complete” (and reportedly “final”) version of “Watchmen,” combining a Director’s Cut of the movie with “Tales of the Black Freighter,” edited together episodically, just like in the book. More than four hours of would-be superhero mayhem and rafts of rotting corpses in a five-disc set.