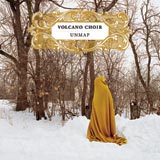 One sure sign that the CD era is waning: the resurgence of 40-minute, nine-song indie LPs, a throwback to vinyl-era album sequencing. One sure sign that celebrating may be premature: the fact that even albums as lean as Unmap still contain filler, which feels that much more egregious under the circumstances. Because the band features Bon Iver’s Justin Vernon, Unmap bears the slightness of a side project, unfairly or not. The opening triptych of “Husks and Shells,” “Sleepymouth” and “Island, Is” is sprightly and likable, but the album is front-loaded; starting with the pretty but directionless “Dote,” Unmap flounders, first through non-entities like “Mbira in the Morass” and “Cool Knowledge,” on through the tuneless, formless closing pair of “Still” (featuring some hilariously incongruous Auto-Tune) and “Youology.” Ultimately, Unmap’s conciseness is refreshing, but not always for the right reasons.