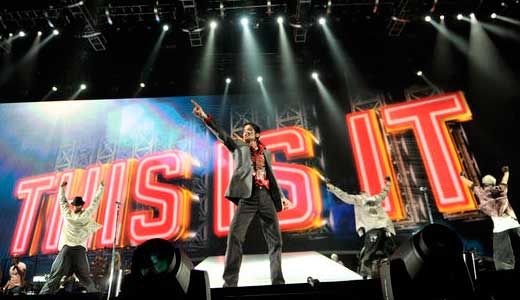 It’s a rare, beautiful thing to see someone doing what they were so obviously born to do. Not only does it inspire others to keep searching for their own passion, it presents an easy, far-from-arrogant confidence that makes onlookers sit back and watch in awe. Michael Jackson was born — perhaps bred — to perform. The stage was familiar and comfortable — it served as both his office and his escape.

In “Michael Jackson’s This Is It,” we see not a frail, decrepit, falling-from-grace pop star, but a man at the top of his game, driven by immense talent and passion. The documentary was gleaned from more than 80 hours of behind-the-scenes footage filmed as Jackson was preparing for his This Is It world tour. Shot in spring 2009, the footage includes interviews with dancers, musicians, producers and the film’s director, the legendary choreographer Kenny Ortega, as well as Jackson himself. Of course a feature film of this nature was never planned, but the curtain never opened on the sold-out tour; Jackson died of cardiac arrest on June 25, just 18 days shy of when the tour was set to debut in London.

The most refreshing aspect of the documentary is that its only focus is on Jackson readying himself and his crew for the tour. No pot-shots on the eccentric performer’s past; no dangling babies or bizarre facial masks; no mention of sunken noses, light skin or crazy family members. This is Jackson, on stage, dancing and singing, gyrating and directing, giggling and teaching.

This was it, or was supposed to be it. The tour was going to be Jackson’s final farewell to his fans, to whom the film is dedicated. The footage includes several dress rehearsals and run-throughs of his most famous songs. From the re-created graveyard scene from “Thriller,” shot in 3-D this time, to the playful, flirtatious skipping in “The Way You Make Me Feel,” Jackson wanted to give the fans what they craved — an over-the-top concert experience grounded in the familiar. “I want it to sound the way I wrote it, the way it is on the album,” he says to his keyboardist after attempting a variation.

“This Is It” is a tribute rather than a sideshow circus. If you’re looking for a freak show or signs that the pop star was nearing death, you won’t find it here. But if you can leave Michael Jackson’s peculiar past at the doorstep, you’ll get a glimpse of the talent behind this generation’s Fred Astaire.