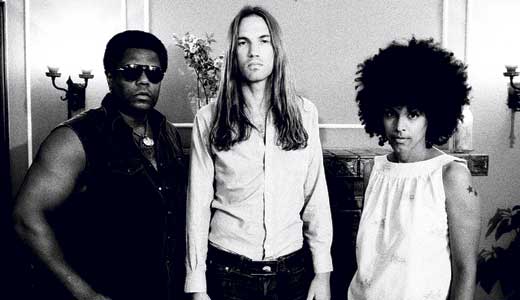 Earl Greyhound began life in 2002 as the pipe dream of New York-based guitarist Matt Whyte. Whyte, who trained in jazz, wanted to get a rock band off the ground.

“We kind of met in a situation where late night, we were just playing songs for each other,” bassist/singer Kamara Thomas recalls. “After we played a few times, he caught the bug that I should learn bass, and that we should song-write and sing together.”

From that point on, the two played around New York City as often as they could. “We just did what we could do, which was play with just the two of us. In some ways, it looks like we started as a duo, but we were really just doing it as a necessity,” she says. They went through numerous temporary or borrowed drummers in the early years, waiting for the right one to find them.

As fate would have it, Kirk Douglas, guitarist for The Roots, caught a duo show and immediately told his friend Ricc Sheridan about the band. “So Ricc came to a few shows, stalked us a little bit, and then he made his move. He was like: ‘I’m your drummer.’” Sheridan has played with them ever since.

For the foreseeable future, Earl Greyhound was fortunate enough to snag the coveted position as opening act for the show that pairs the revered music of both J.J. Grey and Shooter Jennings for the first time. “It’s awesome to be on a tour where you can tell that the people showing up are really excited about new music and live music,” Thomas says. “Shooter and J.J. Grey both play with a lot of heart.”

The feeling is mutual. “(Earl Greyhound) are by far my favorite up-and-coming act,” Shooter Jennings writes via e-mail. “And I consider them dear friends.”

Thomas and Whyte handle all of the songwriting and vocal responsibilities, but when it comes to the band’s musical influence, it’s all over the place. “The guys are, of course, big Led Zeppelin fans. I lean toward girl rockers; I’m a big Chrissie Hynde fan,” she says. “But I also love Fleetwood Mac, Neil Young, The Doors and Dolly Parton.”

When she talks about her approach to writing, Thomas becomes much more meditative about her method. “I don’t tend to write like: ‘This is what happened to me, and this is what I’m going to do about it.’ I try to abstract it and try to get at the heart of the matter from a different angle. But that’s just me; Matt would probably tell you something completely different.”

After seven years together, you have to ask if anyone’s outside interests make life within the band more difficult.

“I’m sure everyone goes through little jealousies here and there. But once you get over the ego part of that, and realize that any creativity on the part of the people you work with is always going to help them.” She falls quiet for a minute to consider the question a little longer. “It’s like free love — but on the creative end of things, as opposed to the unsafe sex end of things. Which is probably best for everyone — nobody gets hurt and nobody gets a disease.”

Earl Greyhound’s next album is finished and should be out early next year. The band is keeping mum as to what the album is going to be called until its actual release date. “Once you hear the name, you’ll know why,” she says.

But Greyhound isn’t alone in its enthusiasm for the new material. “In my mind, it is one of the best and most focused offerings (of) hard rock I’ve heard in almost 20 years,” Jennings says.

“I can’t believe this is our first foray into Kentucky,” Thomas realizes near the end of our conversation. “I don’t know how we’ve missed it on all of our tours; somehow we’ve just never gotten ourselves down here.”