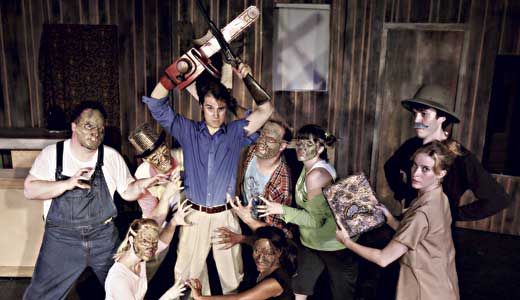 As I watched gallons of fake blood spill onto a gleeful, plastic-wrapped audience during the Alley Theater’s production of “Evil Dead: The Musical,” one thought kept entering my mind: Sam Raimi and Bruce Campbell should be here. They would be having a blast. Like me.

Unbridled joy seems to be what director/producer Joey Arena and producer Jake Wheat want to deliver with this production, and they really outdo themselves. They understand the utterly horrific goofiness of “Evil Dead” and “Evil Dead II,” and while the musical numbers are a welcome addition, getting to revel in the cheesy dialogue, over-the-top acting and gratuitous gore of an ’80s horror flick is really what makes this production a gem.

For anyone who hasn’t seen either film (and if you haven’t, shame on you), here is the gist: Five horny Michigan youths trek to an abandoned cabin in the woods for a spring vacation. The woods around them, possessed by a demonic energy, come alive and start to terrorize the vacationing teens, turning them into demons one by one. The only one left unscathed is Ash (Scott Anthony), a mild-mannered S-Mart employee who makes a not-so-subtle shift from houseware salesman to demon-killing badass. Needless to say, there is quite a bit of gore, and the actors have no problem spilling it onto the audience.

A few more hangers-on arrive later: Annie (Valerie Hopkins), a sexy bombshell whose outfit keeps getting skimpier as the show goes on, her nerdy boyfriend Ed (Herschel Zahnd III) and Jake (Shawn Sloane), the obligatory creepy guy from the woods who, in an inspired moment, performs a number about why he might not be so creepy after all. When these three arrive, the actors get a lot of laughs making fun of conventions in the horror genre. I was particularly fond of the moment when Ed turns into a demon, and Ash, unfazed, mentions that minor characters typically don’t get the chance to kill the hero. This leads Ed into a sad yet hilarious number about being a “bit-part demon.”

The actors are obviously having a helluva lot of fun here, and their energy draws the audience into the spirit of the production. Anthony, who also served as musical director on the show, looks eerily like a young Bruce Campbell and is hilarious imitating the D-lister’s extremely broad acting style. Hopkins, who did the show’s choreography, is great in what is usually the thankless role of “the sexy girl.” And Jason Potts, as Ash’s over-sexed, irreverent best friend Scotty, hijacks every scene with killer comic timing, delivering lines like “This is no time to be acting like stupid bitches” to his female cohorts with sick relish.

The musical numbers do feel like filler at times — songs like “Do the Necronomicon,” with all of the demons performing together, are not as clever as the producers may think, while the oft-repeated “Look Who’s Evil Now” feels downright redundant. More often than not, though, the numbers hit their mark. The standout is Annie’s lament “All The Men In My Life Keep Getting Killed By Candarian Demons.”

Some jokes do fall flat — direct references to Campbell’s book “If Chins Could Kill” and Raimi’s “Spider-Man” films are too obvious to get laughs. Even if they don’t always hit the mark, though, these guys know how to have a good time.