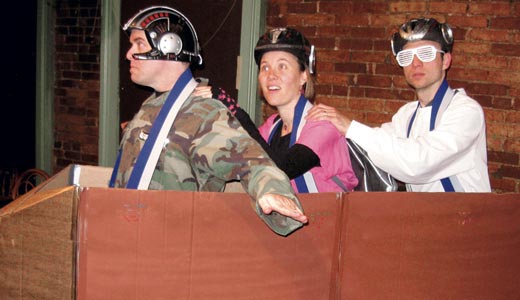 (Le Petomane Theatre Ensemble presents “The Invisible Space Castle of Despair,” through Oct. 31 at The Rudyard Kipling, 422 W. Oak St. For tickets or more info, call 609-2520 or go to www.LePetomane.org.)

In monetary terms, Le Petomane Theatre Ensemble’s new production, “The Invisible Space Castle of Despair,” is thrift-store theater. The company hasn’t done much to alter the spare look of The Rudyard Kipling performance space. The sets and props are made of cardboard and Christmas lights. The costumes look as if someone snuck into the closets of Nancy Sinatra, Ozzy Osbourne and perhaps Adam West’s bat cave, and stole a collection of vintage tights, knee-high boots, heavy metal hairpieces and kinky fetishist accessories.

On the other hand, if an accountant could figure a way to assign a dollar value to unfettered imagination and ingenuity, the books for this production would tell an altogether different story: In terms of sheer inventive genius, “Space Castle” has the biggest budget of Louisville’s fall theater season.

It’s a comic space opera about Luna Mars (imbued with twinkling, starry-eyed optimism by Heather Burns), who learns via a staticky, sputtering hologram that her father — whom she had thought to be a fairly innocuous scientist — was in fact a military operative engaged in a hazardous mission on the dark side of the moon. Luna’s job is to rescue her dad from the clutches of a space vampire.

Beyond that, it’s difficult to say what may happen on any given night. Le Petomane calls this a “U-Pick-Em Adventure.” The conceit is that every time Luna is faced with a critical dilemma, she calls upon the audience — in the role of Intergalactic Council — to vote on which choice she should make. Should she take a slow but reliable shuttle to the moon, or a fast, volatile “Lightning Cruiser”? Should she partner up with a bloody-minded robot named Zolofta (Kristie Rolape), or with a sensitive new age hunchback named Jeff (Tony Dingman), who also happens to have a knack for kung fu fighting? And how on earth (or, rather, on the moon) is she to deal with that two-headed monster?

On Saturday night at the Rud, part of the play’s fun was the way the Council divided into partisan factions, some consistently risk-averse, others ardently supporting the most extreme responses to every choice (and deriding the opposition as wussy).

But plot details notwithstanding, this is a gleefully fun show full of outrageously funny songs and comically campy choreographic approaches to everything from vampiric seduction to what happens when a space castle is suddenly depressurized.

And as for the five-person cast, they’re in exceptional form. Rolape is great fun as the murderous, gerund-spouting robot — her every movement captures the feel of her mechanical hinges. Kyle Ware (multiple roles) is splendid as the lounge-lizard vampire who relocated to the dark side of the moon so he wouldn’t have to worry about the sun but now laments that he can never get any rest. Dingman flips deftly between zany roles, including that of a very odd Sage.