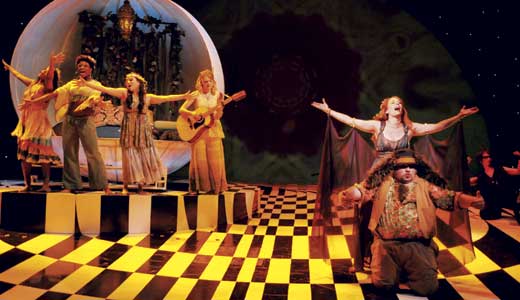 Walking into the Pamela Brown Auditorium at Actors Theatre, the simple set appears to be a large, white globe balancing on a skewed checkered floor. Then the show begins. And as it continues, the set transforms into a psychedelic wonderland.

Actors Theatre’s production of “A Midsummer Night’s Dream,” much like the set, continues to reveal the unexpected — not the least of which are the many monologues and soliloquies put to music, accompanied by a live band. Shakespeare’s play provides the sex and the drugs, so all that was needed was the rock ’n’ roll — and with this production set in the ’60s, everything falls into place.

“A Midsummer Night’s Dream” portrays the adventures of four young lovers, a group of amateur actors and fairies who inhabit a forest. The Lovers’ antics, The Rude Mechanicals’ incompetence and the seductive banter and mischief of The Fairies create a whirlwind night of mishaps, and Marc Masterson’s direction brings out the physical comedy and keeps the language sounding contemporary while successfully allowing the humor to emanate from the text.

Masterson’s direction and the strong cast make the play easily understood, while (thankfully) avoiding condescension. Aaron Munoz, who tirelessly bounds about the stage, makes Bottom’s overzealous bravado and obliviousness quite charming. Elizabeth Gilbert’s portrayal of Helena as gangly and awkward makes her caustic wit that much more surprising. And the flirtation and sexual tension between Oberon (Edward O’Blenis) and Titania (Jessica Ires Morris) provide a grounded sexiness to the production. (Ironically, though, as Theseus and Hippolyta, O’Blenis and Morris seem to lack chemistry.)

The speeches put to song work well, for the most part, such as Bottom expressing his dramatic abilities and Oberon planning his spell on Titania. But there are other times when the music is a hindrance, as with Puck’s first solo. It might be because the song is an introduction to his character instead of a description of an action or emotion, but a lot of the language and information gets lost.

The “sex, drugs and rock ’n’ roll” theme, strong performances and energetic direction keep the play barreling through to the end. And as the laughs continue, culminating in the hilarious play within the play, it becomes obvious why “A Midsummer Night’s Dream” is one of Shakespeare’s most popular comedies — and why Actors Theatre’s production should not be missed.